Shards of the Nightmare, by Joel Cornah (Kristell Ink) | review by Stephen Theaker 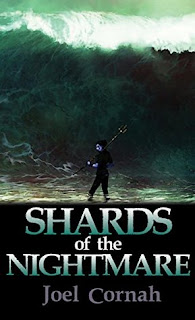 The Shards of the Nightmare are magical items; what they are shards of remains a mystery. The title also reflects the book’s structure, which throws fragments of a nightmarish life at the reader and hopes we’ll piece it together. It begins by telling us that Sininen – raised as a (somewhat stereotypical) girl on the advice of a seer named Sear the Seer – was born with blue skin and lived for centuries. Then we’re snapped back to when Sini was fifteen, still living in the fortress of Dun Coille, and the least-loved scion of an expansionist king and queen who come into possession of a magical sea-sword. A personal bodyguard, Merri, offers some friendship, before we are thrown ten years into the Sea King’s reign of terror. Confusingly Sini is still only sixteen, but perhaps I misunderstood. At this point Sini and Merri are on a quest for the shards and major developments have occurred off-screen. It feels like the reader has skipped the film and watched only the deleted scenes, but to be fair there’s zero chance I would have read a five-hundred-page version that took us step by step through each moment. It’s just too run-of-the-mill, in story, prose and ideas. The positives: Sini’s mad mum might have been interesting, if we had spent more than a few pages with her, and Merri the bodyguard was likeable, at least until she confessed to having fallen in love with a child. The conclusion, where the Sea King is effectively stabbed until he stops calling Sini his son, was also rather discomfiting. Not recommended. Stephen Theaker **
Posted by Stephen Theaker