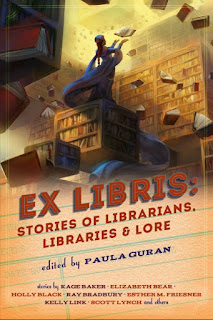 This highly entertaining book (Prime Books pb, 384pp, £14.50) is the forty-second anthology edited by Paula Guran, who gathers twenty-three tales of mysterious libraries, courageous librarians, and the awesome books they protect from us (or protect us from). The stories come from twenty-two different sources, and all but three were first published this century. The twentieth century is represented by Ray Bradbury’s “Exchange”, Esther M. Friesner’s “Death and the Librarian”, and Jack McDevitt’s “The Fort Moxie Branch”, all of which fit the theme so perfectly that it’s easy to see why they were included.

Most stories here could be classed as fantasy, but there is also sf such as “The Sigma Structure Symphony” by Gregory Benford (data mining the SETI Library of messages received), “What Books Survive” by Tansy Rayner Roberts (a small community tries to get by after a devastating alien attack), and “The Books” by Kage Baker (a travelling circus in a world where paperbacks are in short supply). In Ken Liu’s “Summer Reading” a robot tries to interest a tourist in the old-fashioned pleasures of a paper book: “Very old, ancient data, preserved at ultra-low density.”

Many stories magnify the everyday concerns of librarians, like “With Tales in Their Teeth, from the Mountain They Came” by A.C. Wise, in which a librarian notices that books are going missing, or “The Last Librarian: Or a Short Account of the End of the World” by Edoardo Albert, about a particularly stressful stock relocation. “The King of the Big Night Hours” by Richard Bowes reflects dealing with depressed and suicidal patrons, and “In the House of the Seven Librarians” by Ellen Klages tells of a group of librarians who chose not to leave a library that closed. Instead, they kept working, “quiet and content. Until the day they found the baby.”

Cthulhu and his friends are surprisingly absent from the collection, given that the library visit is to the mythos tale what the airport dash is to the romantic comedy. The editor has previously published mythos anthologies, so perhaps it felt like ground already covered. “Those Who Watch” by Ruthanna Emrys and “The Inheritance of Barnabas Wilcox” by Sarah Monette are the exceptions, though I read and enjoyed both without making the connection.

The two longest stories in the book are also the most memorable. Scott Lynch’s “In the Stacks” is about fifth year aspirant wizards at the High University of Hazar, who are required to return a book to the Living Library as part of their training. The idea is that this will make them appreciate the sacrifices of the battle-scarred librarians, whose motto is: “Retrieve. Return. Survive.” It’s a Diabloesque quest into a library rendered feral by millions of magical grimoires, and it’s a lot of fun. Look out for vocabuvores. (Elizabeth Bear’s lighter “In Libres” also features a student’s trip into the special collections, this time with a centaur.)

“Magic for Beginners” by Kelly Link is a forty page novella about teenagers obsessed with a TV show, The Library, “in which a renegade librarian and magician named Fox is trying to save her world from thieves, murderers, cabalists, and pirates”. The show appears at random times on random channels, with actors switching roles, and one episode takes place in the top drawer of a card catalogue. It sounds great: the episode descriptions are a highlight of a fascinating story.

Other contributors include Holly Black (“Paper Cuts Scissors”, about a chap whose girlfriend went to live in a book), Kristine Kathryn Rusch (“The Midbury Lake Incident”, about the remnants of the library of Alexandria), E. Saxey (“The Librarian’s Dilemma”: allow open access to a secret collection?), Amal El-Mohtar (“The Green Book”; a book written by many hands, who are still adding new text), Robert Reed (“A Woman’s Best Friend”; a new take on It’s a Wonderful Life) and Xia Jia (“If on a Winter’s Night a Traveler”, about secret fan clubs for an unknown poet).

Though the theme is narrow, the quality of the contributions and the range of approaches maintains attention throughout. Many librarians will receive this as a present, and few will be disappointed. In fact, the librarians in your lives may well say that they’d happily trade the challenges they currently face – budget cuts, closures and book-buying freezes – for monsters, demons and aliens. “Those Who Watch” describes a book that is “bound in calfskin, [with] fine yellow-edged pages typeset save for hand-illuminated letters at the start of chapters”. A similar edition of this would be ideal, but the paperback will do for now. A treat for anyone who loves books and libraries. ****

This review originally appeared in Interzone #271.
Posted by Stephen Theaker