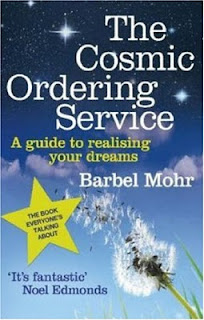 Possibly the most gleefully stupid book I’ve ever read in my life. Full of the utmost idiocy, the book’s entire content simply adds up to this: good things will happen if you hope for them. It’s really just a book on praying adapted for tastes of new age readers. Instead of praying to some god when you’re sad, you should just pray to the universe. Because, you know, the universe cares about you. Forget that on a universal scale you are indistinguishable from the bacteria that live inside your gut: the universe cares about what you want and will help you get it.

The chapter on how this works is very imprecise. Apparently it’s like going down the stairs instead of taking the lift and meeting a delivery man you would otherwise have missed. How that relates to the universe getting you the boyfriend you want is not clear. Who sent you the cosmic boyfriend parcel? Who received your boyfriend order? It’s clear that it’s just a god in disguise.

At least this god has the benefit of not wanting anything in return: no need for following any of those silly rules other religions have, like not working on Saturdays, or not eating pork, or not eating cows, or not coveting your neighbour’s wife. All this great mail order god requires is that you order more, more, more! Who can’t dig a religion like that? Why should religion be a chore? After all, there’s a lot of competition out there – if you’re going to go to all the trouble of believing in one of these fellows, the least they can do is give you everything you want!

Hilariously, towards the end the author can’t even be bothered to finish writing the book, and just prints her notes in bullet form!

The sources are laughable – for example entire pages of those notes are reproduced from three books by someone who wrote a letter to his god asking lots of questions and then found that – oooh! – his pen didn’t stop writing at the end of the letter and wrote all the answers…

Her mention of Uri Geller is also delectably stupid. She begins by saying that she thought his spoon-bending was an optical illusion, then says that her friends corrected her. Aha, I thought, finally a bit of sense in this most daft of books, but no: her friends informed her that he simply persuades the atoms of the spoon to disperse with the power of his mind. Good grief! There’s nothing mystical about spoon-bending. It’s a magic trick: instructions on how to do it were published in an Israeli journal of magic in the 1960s!

You would think that having written a book about one crazy idea, the author would stick to that one thing, rather than chucking in more foolishness, but of course not: cosmic ordering can also help you to contact the dead. She tells us sagely that there is “increasing evidence” for the existence of a spirit world – oddly she neglects to provide any footnotes pointing us in the direction of this evidence.

Here’s the real evidence: James Randi has offered a million dollars for anyone demonstrating any supernatural abilities, such as contacting the dead. No one has claimed that money. So we must conclude that anyone who openly claims to be a psychic, medium etc is a fraud. Even if they don’t need the money themselves, there are many deserving charities to which they could donate it. (If there are actual psychics in the world, they must be keeping themselves a secret. That would be quite understandable!)

If you’ve read Michael Shermer’s Why People Believe Weird Things, you’ll be pleased to see gathered together in one book almost every problem identified in his chapter How Thinking Goes Wrong. In particular, scientific language does not make a science; bold statements do not make claims true; rumours do not equal reality; and, especially, after-the-fact reasoning and coincidence.

This book will appeal to the slow-witted, the extremely gullible, and anyone who wants to be told, you will get everything you want, all you have to do is hope – and buy this ridiculous book.

With the Office of Fair Trading taking long-overdue action against so-called psychics, hopefully it’ll only be a matter of time until books like this are prevented from having “self-help” printed on the back, and are removed to a supernatural shelf, where their pernicious influence will only affect those who actively search them out, rather than preying on vulnerable people looking for help.