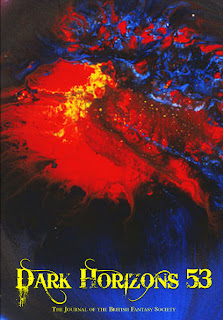 Dark Horizons 53, produced by us for the British Fantasy Society, contains nine short stories of fantasy, horror and a smidgen of science fiction, arranged very roughly in chronological order; from days of yore to near-future apocalypses:


Interspersed among the stories are eight poems:


Then there's an article taken from a forthcoming book on Terry Pratchett, plus an interview with the book’s author, Lawrence Watt-Evans. Later in the issue, the BFSQ&A section makes its first appearance, covering various burning questions of the day, such as: Is the BFS biased towards horror? Who reads Margit Sandemo? Why join the BFS? And why make a fan film? The issue comes to a triumphant close with our updated submission guidelines, the advertising prices, and a list of BFS email addresses!

Jim Fuess provides the cover art for this issue, while six other wonderful and generous artists allowed the use of their work to illustrate the issue’s fiction: Lara Bandilla, Dominic Harman, Steve Cartwright, Michelle Blessemaille, Paul Campion and Alfred R. Klosterman.
Posted by Stephen Theaker