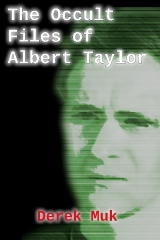 Professor Albert Taylor leads an informal team of paranormal investigators. "Granted," he says, "there's been a lot of hoaxes, but then there are the cases that just can't be explained by science and mediums. That are just too bizarre." And that's where Albert, a professor of anthropology and the paranormal in his early fifties, steps in. This book contains eleven of his investigations, taking in ghosts, aliens, vampires, psychics, cults and much, much more.

Taylor is a funny kind of hero, motivated less by the desire for truth than in hope of making a solid discovery that will "put him in the limelight regarding ghost research". During one moment of reverie, "He imagined himself being interviewed by countless talk shows ... I could be rich! he thought." He runs a magazine (The Occult Files) and thinks nothing of whisking his team off to Hawaii to look for vampires. He has little interest in his students, and seemingly no understanding of the scientific method.

This isn't a good book, though it's clear the author has made an effort with it. Reading it wasn't unbearable – it had at least been proofread – but it wasn't very exciting. The stories are generally dull and uninspired, with the worst, a stupefying plod through the mountains following a bigfoot, being dull, uninspired and twenty pages too long. The stories work their way through a checklist of bog standard creatures, the denouements uniformly anticlimactic.

Part of the problem is that there are very few surprises, since Taylor and everyone he encounters has the Sherlockian ability to guess exactly what's going on from the barest of clues. A guy thinks his girlfriend has been killed by Jack the Ripper? Mum thinks her daughter summoned a demon from another dimension with a ouija board? A UFO cult waits for their alien gods to visit? No spoilers, but Taylor very rarely discovers that anyone is wrong in their beliefs, however outlandish.

The other big problem is a complete lack of atmosphere. There's no real tension here, supernatural occurrences being too often followed by bathetic utterances such as "That was freaky!" or "Whew! I've never had so many goose bumps in my life"  or (hilariously) "I don't swallow ... everything that's shoved into my face." The dialogue is dominated by half-hearted banter and chitchat.

When members of the team die in what would surely appear to the police to be suspicious circumstances, there seems to be little consequence. The conclusions of "Dear Boss" and "The Sun Disc" would have had profound effects on American society, but again, no consequences. And despite Taylor's dreams of fame and fortune, he doesn't hesitate to utterly destroy any supernatural beings he encounters.

It's a book that's inordinately respectful of other people's beliefs, which was rather sweet, and I liked the way that each story ended with a Case Closed stamp, although the final twists often had the effect of making those stamps rather ironic. I thought of Taylor as a Will Ferrell character, declaring "Case Closed, Case Closed!" even as ghosts jeered at him from the shadows! Overall, not a book I'd really recommend, but it did have a kind of goofy charm, and I enjoyed it a bit more than I expected.

The Occult Files of Albert Taylor