The Paperback Fanatic #16, and news of future issues 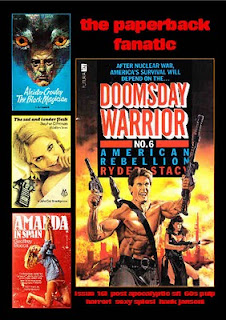 Issue 16 of the The Paperback Fanatic arrived a few weeks ago. It's one of my favourite magazines, and this is another excellent issue, full of (a) fascinating information and (b) saucy covers. The only things that would improve it are clearer issue numbers on the front and a contents page…

Articles this time include:

Editor Justin Marriott has announced tentative plans for issues 17 and 18, both of which have articles pencilled in about overproductive heroes of mine and their adventures in publishing: Michael Moorcock and New Worlds in the former, Lionel Fanthorpe and Badger Books in the latter.

If anyone wants to relaunch Badger Books, give me a bell and I'll be your Bron Fane!

Subscriptions are ridiculously cheap, so it's always a good time to subscribe.
Posted by Stephen Theaker

Email ThisBlogThis!Share to TwitterShare to FacebookShare to Pinterest
Labels: The Paperback Fanatic