The Terror and the Tortoiseshell, John Travis 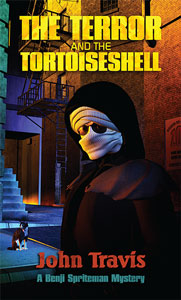 During the Terror, animals became human-sized and gained the power of speech – not to mention the intelligence to make that power useful. Having seen his gumshoe owner set upon by lions, Benji Spriteman (the tortoiseshell cat of the title) inherits his office, apartment and patter. There are few humans left, and Benji is dragged into the case of a serial killer preying on them, teaming up with scruffy Lieutenant Dingus, a tenacious basset hound who always has just one more question to ask...

Though the Terror doesn't seem to make a great deal of scientific sense, the world it's created is an interesting one, providing a very colourful backdrop for a detective novel. And as a detective novel, this works well. The murder mystery is a good one. There are plenty of clues, suspects, snitches and motives, and a series of intriguing plot developments. Benji rarely moves beyond a default private eye characterisation, and celebrity animal cameos – though entertaining – break the mood a bit, but the novel grips throughout.

The premise sounds cuddly (serial killer aside), but the Terror of the title is aptly named, leading to scenes of human abuse that, while provoking reflection upon the way humans treat animals, are often painful to read. For example, at the zoo Benji sees "a big striped Cat with a chair in one paw and a whip in the other" snarling "at something small in the corner of a filth-filled cage". These sequences, and those where Benji encounters animals unchanged by the Terror, show the novel at its most powerful and affecting.

Ironically in a book that has a lot of fun with the poor spelling of the rats who run the city's newspaper, The Terror and the Tortoiseshell is marred by shocking errors, including a wide selection of grocer's apostrophes. It's one thing to not know how to spell (lobster) thermidor or (chicken) coop, another to not know that the sentence "The diner's applauded" does not require an apostrophe. As an author I'd be embarrassed to have this published under my name; as a publisher I'd be begging the author's forgiveness for letting it slip through.

While I applaud the publisher's enthusiasm for ebooks and other modern forms of book distribution, and it is a very good book, I can't quite bring myself to recommend a book containing errors I'd be embarrassed to see in my six year old daughter's schoolwork. As an ebook, also, it's flawed, with the chapters not set up properly. But if a corrected edition is released, and you enjoy crime novels, it's worth a look. The end leaves the greater mystery of the Terror itself unanswered, and I'll certainly be looking out for future books in the series.

NB: the publisher has advised that a corrected Kindle edition will indeed be forthcoming, and that the current Kindle edition contains errors that do not appear in the printed editions.