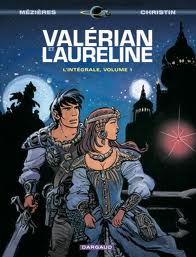 First a disclaimer! Reviewing something that I have read in French presents a certain difficulty: I can’t always be sure that I have understood it properly. Of course that concern applies to books in English too, but I apologise in advance for any really bad mistakes made here.

Les Mauvaises rêves (“The Bad Dreams”) introduces Valérian, a space-time agent working out of Galaxity, a far-future city in which most of the population happily sleeps away their lives. After villain Xombul steals a time machine Valérian pursues him to the 11th century. There he meets adorable, tough, capable Laureline, at first his guide and in later stories his partner and girlfriend. (Her name has been retrospectively and laudably added to the title of the series. I hope Obelix isn’t too jealous.) This first story is notably more comedic than the rest of the book, but even here the comedy is more in the art than the writing.

In La Cité des eaux mouvantes ("The City of Shifting Waters") the two agents follow Xombul to the drowned New York of 1986. The story meanders a little, but there’s a grandeur to the illustrations, and the mood becomes oppressive as the situation worsens. By Terres en flammes (“Land in Flames”) the survival of the planet itself is in doubt, and despite the light tone there’s a profound hopelessness to their journey across a USA that is waiting to die.

L’Empire des mille planètes takes Valérian and Laureline to the empire of a thousand planets, of which we only really see one, the capital: Syrte-la-Magnifique. A mysterious cabal has seized control and the time-space agents are persuaded, step by step, to do something about it. By this stage the strip feels not unlike sixties Who with an unlimited budget, though Val has no reservations about using his time machine to get an edge in space battles.

I treated myself to this book and two others (La Conjuration de l’Opale and Blake et Mortimer: Le Secret de l’Espadon), choosing them very nearly at random from www.amazon.fr. Reading any French album still feels like a very special treat to me, but this book was something more than that: it quickly became clear that this was something I had been missing out on, a comic strip perfectly tailored to me.

Admittedly, my first impression was one of slight disappointment: I’d expected a slightly more realistic art style, but it didn’t take long to warm to the artwork. It’s bursting with colour (supplied by Evelyne Tranlé), detail and joie-de-vivre, making even the bleakest moments a treat for the eyes.

From start to finish it was a pure joy to read. This kind of space adventure is exactly my favourite kind of thing to read, and these stories are created with the care and attention that is so typical of bandes dessinées. If you could promise me an endless supply of books like this I would happily forego all others.

The following four volumes have all gone straight onto my Amazon wishlist, my birthday is coming up, and they’re all marked highest priority, so with luck I will soon be reporting on subsequent adventures. There’s a world of brilliant comics over the channel: don’t let your GCSE in French go to waste.