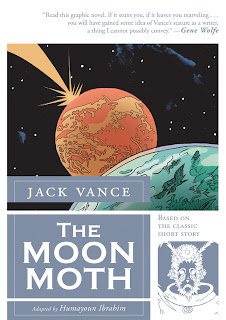 Adapted by Humayoun Ibrahim from the short story by Jack Vance, The Moon Moth (hb, 128pp) is another interesting comic from First Second, who previously published the very decent Orcs: Forged for War and seem to be making a praiseworthy habit of looking beyond the obvious candidates for adaptation into graphic novels. An opening introduction to Vance’s work by Carlo Rotella is not uninteresting—especially insofar as he actually visited Vance to interview him—but like Brandon Flowers discussing the Pet Shop Boys in A Life in Pop he seems rather too embarrassed about his enthusiasm for his subject. Never mind, the main course is the actual comic, and that is excellent.

Edwer Thissell has a mere three days to prepare for his mission to Sirene, a world on which he will be at constant risk of death should he give offence: the previous representative of the home worlds having been instantly beheaded after approaching a woman in the street. There is no money on Sirene, the only currency being glory—strakh—and everyone must wear masks appropriate to their strakh. Despite being the representative of one hundred billion people, Thissell is discouraged from wearing too showy a mask: “If the home planets want their representative to wear a sea-dragon conqueror mask they’d better send out a sea-dragon conqueror type man!” He settles for the lowly, dowdy moon moth.

And not only must he wear the right mask, he must sing everything he says and accompany it with a musical instrument appropriate to the status of the person to whom he is talking! After three months of music lessons and slow adjustment a message arrives: Haxo Angmark—“assassin, agent provocateur, and ruthless criminal”—has landed on Sirene and must be captured—and if not, killed without hesitation. The problem for Thissell, of course, is that Angmark is now wearing a mask, just like everybody else. In a society where murder falls under the heading of “religious differences … of no importance”, but removing a mask has the gravest possible consequences, how can Thissell unmask—literally and metaphorically—the criminal?

This is a very fine adaptation of Jack Vance’s story. The pacing is excellent, the superbly clever conclusion played to fullest effect, the art bold, vigorous and exaggerated, but ornate and detailed where necessary. Right up until the end Thissell is portrayed in a manner that’s rather more skittish than you would normally imagine of a Vance hero, with flecks of sweat flying from his mask, but in the circumstances his fearfulness is hardly unreasonable. Hilary Sycamore’s colours are nothing short of wonderful, and the lettering manages superbly the difficult task of conveying the way in which words are being sung. I will certainly look out for further work from Humayoun Ibrahim.
Posted by Stephen Theaker