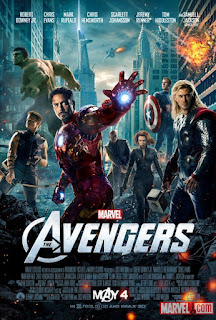 During the opening weekend of The Avengers (Avengers Assemble in the UK), directed by Joss Whedon, Americans plunked down $207.4 million to watch their beloved Marvel superheroes join forces. The earnings, to borrow a term from the Hulk’s lexicon, “smashed” the previous record-holder, Harry Potter and the Deathly Hallows Part 2, by over $38 million. Worldwide, The Avengers brought in over $650 million in 12 days.

Frenetic, heavy on special effects, and one-dimensional, The Avengers achieves its success by giving easily-distracted contemporary moviegoers what they crave. And this film didn’t simply materialise through a portal in the sky; it is built on a foundation of several stand-alone films that show what each Avenger is capable of independently. “And now they’re coming together?” thinks the common man. “I’ve got to see that!” Brilliant marketing.

It is this reviewer’s belief that those who paid to see this film did so for three reasons: to laugh, to see mass destruction, and to watch heroes trounce villains (am I really spoiling anything?). With the force of Thor’s hammer, The Avengers pounds viewers over the head with these three elements. It even keeps the love interests to a minimum. Sorry, Pepper Potts and Jane Foster!

The standout character is “genius, billionaire, playboy, philanthropist” Tony Stark (i.e. Iron Man), who keeps the viewer wondering what he’s going to say next. A great deal of the film’s humour comes from Stark’s smart aleck comments. He refers to Thor as “Point Break”. He calls Captain America a “lab rat”. He addresses Hawkeye as “Legolas”. And unlike his cohorts, Stark wants to watch Dr David Banner go green: “Dr Banner, your [scientific] work is unparalleled. And I’m a huge fan of the way you lose control and turn into an enormous green rage monster.”

As the Hulk’s third big-budget manifestation, after Eric Bana in Hulk (2003) and Ed Norton in The Incredible Hulk (2008), Mark Ruffalo portrays a more subdued, professorial Banner who has learned, for the most part, to control his powers. Banner repeatedly warns (e.g. “Don’t make him angry . . . ”) others about his alter ego. This builds anticipation for when he will transform.

As in their previous films, Thor and especially Captain America are less about character, and more about action, while Natasha Romanoff/Black Widow and Clint Barton/Hawkeye drift through the film like ice particles in a tropical drink.

Tom Hiddleston maintains his role from Thor (2011) as Loki, Thor’s adopted demi-god brother and the chief villain. With his elegant bearing, smooth tongue, and patience, Loki embodies what many filmgoers loathe and fear: intelligence. Sure, Stark and Banner are brilliant. But Stark wears a Black Sabbath shirt and drives cool cars, and Banner’s just a normal guy.

Learning from recent successes like Transformers and Chronicle, The Avengers culminates in an urban blitzkrieg. This time, the streets and skies of Manhattan swarm with superheroes, aliens, and a fleet of gigantic ships that seem to move through water rather than air. The number of explosions would make Monty Python’s Tim the Enchanter proud. In a particularly impressive filming technique, the camera follows one Avenger’s flight path or weapon trajectory, then switches to another Avenger.

And what’s all this fighting about? A glowing cube called the Tesseract. If Loki gets it, the Chitauri, his alien friends, conquer the galaxy and he takes over Earth. So the Avengers must stop him. Despite all the technological progress in movies, it’s still about the treasure hunt.

Yes, The Avengers is a masterpiece of customisation to the masses’ cinematic preferences. Like Transformers, it even offers longer stretches of explanatory dialogue (about the Tesseract, about technology) so that attendees can check their urgent texts (e.g., “Johnny’s soccer team’s winning!!”) and make critical Facebook entries: “watching avengers OMG this is so awesome!!! And johnny’s team’s winning!!”

Is The Avengers an entertaining movie? Absolutely. Is it a phenomenal film? No. Titanic. Gangs of New York. Signs. Those are phenomenal. However, although my fellow moviegoers did not clap after those films, they did after The Avengers. Hmmm.
Posted by Stephen Theaker