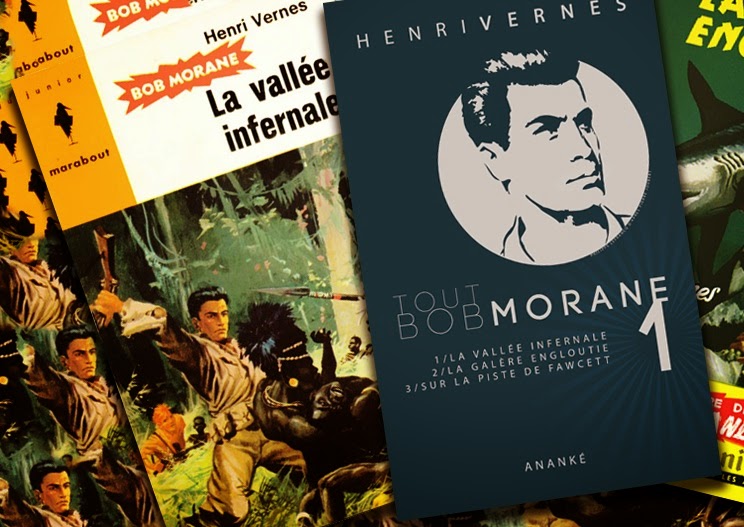 La Vallée Infernale (in Tout Bob Morane 1, Les Éditions Ananké, ebook, 10,308ll) by Henri Vernes is the first novel in the long-running Bob Morane series, which doesn’t seem to have made much of an impact in Anglophone countries. Post-WWII Bob is working as a courier pilot for a shifty operator who has him run some scallywags to Papua New Guinea.

It’s supposed to be an flyover, but upon arrival they demand to land, and when Bob declines they force a crash, into an area cut off by mountains, ruled by dangerous tribes, and far from safety. His honour forces Bob to attempt the protection of the idiots who have landed him in the mess.

But what to do when they announce their intention to steal the emerald eyes of a statue worshipped by a nearby tribe? And what of their willingness to slay the entire tribe by machine gun should it be necessary? Bob’s only friends in this situation are his two firm fists and his loyal Scottish chum. The chances of them escaping intact seem desperately slim.

It’s probably more appropriate to describe this as a reading of La Vallée Infernale rather than a review, because, as usual, having read a book in the original French I can never be sure how well I’ve understood it. (It’s hard enough understanding the books I’ve read in English!) For example, in this novel I read the following: “Morane tendait le bras vers les deux prisonniers entravés à leurs poteaux, de chaque côté de l’idole”.

I took that to mean “Morane held out an arm towards the two prisoners boiling in their pots, on either side of the idol”, and immediately sprang to Twitter to decry the book’s old-fashioned racism. In fact, “poteaux” means “posts”, and “entravés” means “chained”. Now, in that case it’s not as if I grossly misjudged the book – the men were still going to be eaten by cannibals with bones through their noses! But the potential for such tiny mistranslations to be scattered through the whole book would make a review unfair.

What I adore about Bob Morane is that he is no rock. He is a tough fighter, of course, but he is prey to crippling fear and doubts, an existentialist action hero. A typical passage reads: “Une sueur glacée noyait son front, tandis qu’il se répétait en lui-même: ‘Tu dois réussir, Bob. Il faut que tu réussisses!’” (An icy sweat drowned his brow, while he repeated to himself, “You must succeed, Bob. You must!”)

One thing that puzzled me about this novel was why Bob let his villain escape so often. He knows the guy’s after the emerald eyes of the idol, he knows that he’s ready to kill men, women and children to get it, and yet Bob lets him stroll around free as a bird. I expect Bob becomes less trusting in later volumes, not so ready to take the word of a cad.

I enjoyed this novel immensely, despite its dated elements, because Bob himself is such an interesting character. He’s been a huge influence on my little-read Howard Phillips series of stories, where I try to put a hero with similarly overdeveloped sensibilities into traditional action hero situations. With the series of omnibus editions now available as ebooks – and included in the Kindle lending library – I’m sure it won’t be the last of the series I read. Ideal for anyone learning to read French.
Posted by Stephen Theaker