Empress of the Sun by Ian McDonald, reviewed by Stephen Theaker 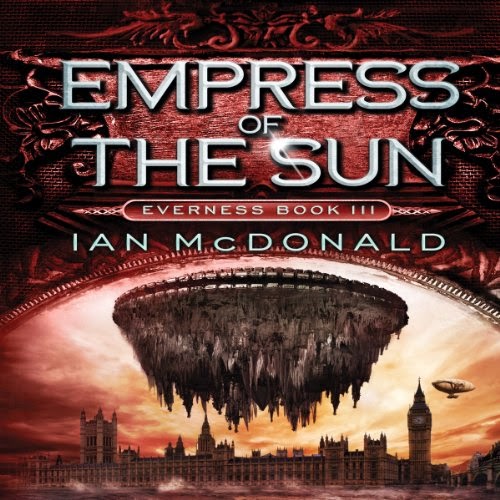 Ian McDonald’s Empress of the Sun (digital audiobook, Audible, 10 hrs 40 mins), read by Tom Lawrence, is on the whole a audiobook of two sides. One deals with Everett Singh, off on an airship, Everness, that can slide between alternative Earths with a rough and ready crew. In this adventure they find themselves on an Earth where the dinosaurs never died out, and their evolution and development continued, to the point where they were powerful enough to re-engineer most of the solar system into a great torus around the sun.

The other side of the book concerns the alternative-world Everett who has taken his place back home, and his efforts to avoid detection. That’s not the kind of thing his cyborg powers make any easier, especially when you add best friends and potential girlfriends to the mix – it’s hard to resist showing off. He is originally from a world ruled by the Thrin, who powered him up and sent him off to make trouble elsewhere, and they aren’t too happy that he has gone off-mission.

A lot of the book’s fun comes from the efforts of the two boys to interact with members of the opposite sex: bolshy captain’s daughter Sen on one side, snarky schoolgirl Noomi on the other. One girl shows her interest by making crude comments on the ship’s deck, the other starts a Facebook page devoted to the cyborg’s bum, asking people to vote on snapshots taken while he’s keeping goal. All the awkwardness should resonate with a teenage readership, and at least amuse older readers.

The reading by Tom Lawrence is good, the characters easy to tell apart, the narration moving from action to comedy to drama without ever running into trouble. I wouldn’t be in a hurry to listen to or read earlier or later books in the series, of which this is the third instalment – it’s aimed at a younger audience than me, and it doesn’t push my particular buttons. But I don’t begrudge the time I spent listening to it, and I finished the whole thing over the course of two or three days, pretty much the fastest I’ve ever listened to a full-length audiobook novel.
Posted by Stephen Theaker