Book notes: The Chimpanzee Complex, The Whispering Swarm, and more 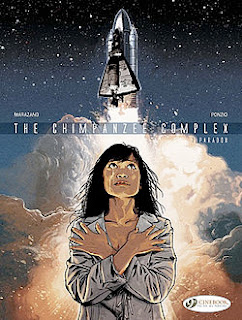 The Chimpanzee Complex: Paradox (Cinebook) by Richard Marazano and Jean-Michel Ponzio. An astronaut looking forward to reassignment, and spending more time with her daughter, is required back in space after the astronauts from Apollo 11 splash down – again. The year is 2035. The story is intriguing, reminding me of the first Quatermass Experiment. The art is a bit unusual, looking to me a bit like it’s been drawn over photographs, but I got to like it. ***

The Dirty Dozen: The Best 12 Commando Books Ever! (Carlton Publishing Group), edited by George Low. Took me a long time to finish this one. For our overseas readers who haven’t heard of Commando, it’s a small squarish comic of about sixty pages, with a couple of panels per page, telling lots of stories about World War Two, very much in the style of British war films. The stories in this collection are a mixed bag, some tedious, some thrilling. The highlight for me was “Battle-Wagon”, about the rivalry between two teams of supply truck drivers racing for the same destination. ***

The Great Bazaar & Brayan’s Gold (Tachyon Publications) by Peter V. Brett. A courier travels through mountains haunted by rock demons, and tries to recover precious pottery from a village abandoned to sand demons. Enjoyable enough. My review appeared in Interzone #259. ***

The Hitchhiker’s Guide to the Galaxy: Primary Phase (BBC Audio) by Douglas Adams. Audible edition collecting the Radio 4 series that started it all. Seems strange that I listened to this for the first time so long after watching the television series, reading the books, watching the the film and listening to the audiobook read by Stephen Fry, but the jokes still made me laugh. It had never clicked before that the extracts from the Guide had originally served as introductions and recaps for each episodes. Very much looking forward to the next three phases. *****

The Merchant and the Alchemist’s Gate (Subterranean Press) by Ted Chiang. An alchemist tells a merchant a series of stories about the people who have used his magical gate – one side takes you into the past, the other into the future. It’s a stylish and clever take on the style of the Arabian Nights. ****

The Whispering Swarm (Tor Books) by Michael Moorcock. A character called Michael Moorcock becomes a professional writer, while cheating on his wife and making regular visits to an abbey connected to all time and space by way of the moonbeam road. It’s a fascinating book, but as a novel it slumps badly in the middle before ending well. Maybe they should have sold it as an autobiography and let the fantasy elements come as a surprise. Reviewed for Interzone #258. ***

Thorgal: The Guardian of the Keys (Cinebook) by Grzegorz Rosinski and Jean Van Hamme. Volsung of Nichor steals Thorgal’s identity and takes his place among the Vikings. Invincible, thanks to a belt cruelly stolen from the guardian of the keys (it’s the only bit of clothing she has!), he begins to murder his way to the kingship. ***

Tortured Souls: The Legend of Primordium (Subterranean Press) by Clive Barker. This collects short stories that originally appeared in the packaging of a series of action figures, so it’s a bit disjointed, but I liked the idea that on Sunday God, rather than resting, made all the monsters. ***

Usagi Yojimbo Saga, Vol. 1 (Dark Horse Books) by Stan Sakai. The adventures of a ronin – a masterless samurai – with a conscience. So brilliant even the appearance of the Teenage Mutant Ninja Turtles couldn’t harm it. Poetry in every panel. *****

Welcome to Just a Minute! A Celebration of Britain’s Best-Loved Radio Comedy (Canongate Books) by Nicholas Parsons. Read in a single day! Fascinating anecdotes of tetchiness, bitchiness and no little affection among the Just a Minute regulars. Almost enough to make me forgive Parsons for the time we took the children to his supposedly PG-rated Edinburgh show. You can’t trust anyone these days! ****
Posted by Stephen Theaker