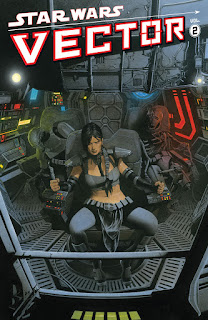 Star Wars Tales, Vol. 6 (Dark Horse Comics) by Jeremy Barlow. Last and weakest of the series. Too glum, too serious, and too little of the major characters, so that it could try to stay in continuity more. A lot less fun than any of the previous books. ***

Star Wars: Crimson Empire III: Empire Lost (Dark Horse Comics) by Mike Richardson, Randy Stradley, Paul Gulacy, Michael Bartolo and Dave Dorman. The third adventure of Kir Kanos, former guard to Emperor Palpatine, is the first to include Luke, Leia and Han (who seem rather tetchy), but it’s the usual story of imperial remnants fighting the new republic and each other. Often hard to tell what’s happening in action scenes. ***

Star Wars: Legacy, Vol. 10: Extremes (Dark Horse Comics) by John Ostrander, Jan Duursema, Brad Anderson and Sean Cooke. Takes the series up to its cancellation with issue 50, though volume 11 continues the story by collecting a mini-series. All the plotlines that have been running keep on running. Cade Skywalker continues to draw on the power of the dark side to fight his enemies and help his friends, while the Sith, former emperors and the remnants of the alliance jockey for galactic power. Readable without being all that exciting. ***

Star Wars: Legacy, Vol. 11: War (Dark Horse Comics) by John Ostrander, Jan Duursema and Dan Parsons. Burdened with much recapping in its early pages, the miniseries collected in this volume still does a surprisingly good job of roosting all the pigeons that flapped around in books one to ten. Cade Skywalker confronts the dark side of the force, the new alliance goes for broke, and the Sith reveal their terrible new weapon. I never grew to love this series, but I read one volume after another, and that tells its own story. It’s essentially a thousand-page Star Wars graphic novel. How could I not enjoy it, at least a bit? ***

Star Wars: Legacy, Vol. 5: The Hidden Temple (Dark Horse Comics) by John Ostrander, Jan Duursema and Dan Parsons. The story steps up a gear, but Cade is still an unpleasant protagonist with terrible hair and Darth Krayt seems more like a He-Man villain than something from Star Wars. I’ll keep reading, but only because I bought the whole series in one go. ***

Star Wars: Legacy, Vol. 8: Tatooine (Dark Horse Comics) by John Ostrander, Jan Duursema, Dan Parsons and Brad Anderson. The most obnoxious brat in comics turns to ripping off pirates but they get wise to his force tricks and his stay on Tatooine ends up being longer than planned. Elsewhere in the galaxy far, far away we see how a Mandalorian (like Boba Fett) came to join Rogue Squadron, and what happens when his vengeful ex-wife finds him there. ***

Star Wars: Vector, Vol. 2 (Dark Horse Comics) by Rob Williams, John Ostrander, Dustin Weaver, Jan Duursema and Dan Parsons. The second half of a crossover between four ongoing Star Wars titles. This contains one story with Luke Skywalker set during the rebellion, and one set over a century later with Cade Skywalker. The connection is a long-lived former Jedi, Celeste Morne, who is bonded with the Muur talisman and the Sith consciousness within it. As well as volume two of Vector, this also stands as volume four of Rebellion and volume six of Legacy, a bizarre set-up that left me searching fruitlessly for the latter after having bought the other ten volumes in a sale. In this book Cade teams up with a trio of Imperial Knights and Celeste Morne to make an assassination attempt on Darth Krayt. It’s okay. ***