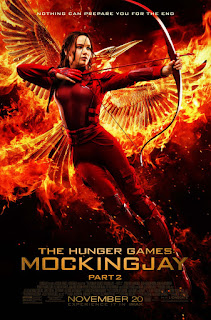 Inspirational series closes with a fizzle.

In Mockingjay – Part 2, the fourth and final installment of the hitherto superb The Hunger Games series, something slips. The viewer feels disconnected from the characters. Their dialogue sounds contrived and melodramatic. The emotional investment in the fate of Panem seems tempered. When characters flee from life-threatening dangers, they appear to jog rather than sprint.

The primary suspect for this tepid conclusion is the decision to split the final episode in Suzanne Collins’s trilogy of novels into two films (both directed by Francis Lawrence). It’s not impossible to do this successfully: the Twilight dynasty did it with Breaking Dawn Parts 1 and 2, and Peter Jackson segmented Tolkien’s novel The Hobbit into three phenomenal films.

Though Mockingjay - Part 1 (2014) held its own as a tense segue to a finale, Part 2 doesn’t follow through: too much time holed up in dark rooms watching televised updates. Too much chatter among humdrum characters. Too much filler and not enough substance.

Most of Mockingjay - Part 2 details protagonist Katniss Everdeen (Jennifer Lawrence) and a small unit journeying on foot through a mostly abandoned Capitol. The group hangs back from the front line so its videographers can document Katniss, revered among rebels as the Mockingjay… the embodiment of their revolution. Katniss plays along with this charade so that she can pursue her ultimate goal of assassinating President Snow (Donald Sutherland), the Capitol’s Machiavellian leader.

On their way, the group must contend with “pods” that unleash deadly weapons and with the Capitol’s Stormtrooper-like Peacekeepers. Unfortunately, these challenges are far too scarce.

Katniss travels with competing love interests Gale Hawthorne (Liam Hemsworth) and Peeta Mellark (Josh Hutcherson), but the intensity of their rivalry pales in comparison to that of, for instance, Twilight’s Jacob Black and Edward Cullen. Gale has all the personality of a robot, and Peeta’s struggle to keep himself from offing Katniss – he’s been brainwashed by the Capitol – grows tedious. One finds oneself saying, “Ah get over it, already!”

In my review of The Hunger Games: Catching Fire (2013), I stated the film may have achieved the rare distinction of outshining the book. This time around, the book has reclaimed its title.

Bright Spots
Mockingjay – Part 2 certainly was not a total failure. A couple of action sequences come to mind: one in which the group faces an oil flood in an enclosed space while Peeta goes cuckoo, and another in which Katniss and company engage in an underground battle with “muttations” (aka “mutts”) with no eyes and massive teeth.

The film’s climax manages to resurface the vibe of its predecessors. Despite thousands of spectators, drumbeats make the only sound as Katniss promenades toward an action that will shock Panem. It’s a sharp contrast to the cheering and screaming that accompanied her on the same walk in previous episodes.

The talents of the film’s true stars carry over. It’s a pleasure to watch Julianne Moore as President Alma Coin, the opportunistic and manipulative leader of the rebel army. She sees Katniss as a tool to aid her rise to power and eventual usurpation of President Snow. But just how far will Coin, with her lizard-like eyes, take her Macbethian ambition?

Another treat is Coin’s constantly smirking co-conspirator, the Gamemaker and public perception guru Plutarch Heavensby, played by Philip Seymour Hoffman. Rarely is a know-it-all so likable.

With President Snow, Donald Sutherland offers a nuanced supervillain who stays true to his character. Whether he’s sipping liqueur amid his panderers or facing an imminent threat, Snow simultaneously conveys repulsion toward and admiration for his chief adversary Katniss Everdeen.

In the film’s most moving scene, Jennifer Lawrence once again proves her Oscar worthiness as she mourns the loss of a loved one. It’s a rage- and grief-fuelled release that brings together all the injustice and pain that she’s suffered. Brilliant.

Dystopia Denied
During Katniss’s earlier Hunger Games exploits, her mentor Haymitch Abernathy (Woody Harrelson) repeatedly advises her to better relate to her television audience. This autonomous young lady, despite her heroic feats and eventual Mockingjay moniker, has trouble connecting with others. Lovey-dovey Katniss Everdeen is not.

Moreover, the hardships that Katniss endures throughout the series arguably make her less connected, perhaps even cold. This is war, and war leaves lifelong psychological scars.

Considering this, it was hugely disappointing to watch a rainbows and butterflies conclusion that abruptly supplants a dystopian world with that of a fairy tale. It’s an insult to the sombre tone that pervades these films and the books. Katniss Everdeen is not a caretaker. Katniss Everdeen is a survivor. – Douglas J. Ogurek ***