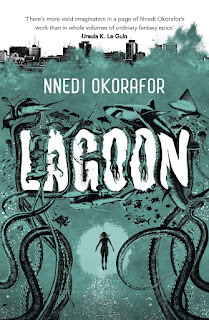 Lagos was lazily named by Portuguese explorers in 1472, we are told: lagos means lagoon. Five hundred and thirty-eight years later, just after 11.55 pm on 8 January 2010, a huge alien craft plummets into the same lagoon. The ship has a transformative effect on the Nigerian ocean, “now so clean that a cup of its salty-sweet goodness will heal the worst human illnesses and cause a hundred more illnesses not yet known to humankind”. The swordfish we meet in the prologue triples in size, acquires retractable spines and golden armoured skin.

The aliens are more cautious on land, sending at first a single representative. It/she makes contact with three humans caught in the ten-foot wave thrown up by the ship’s arrival. Adaora is a marine biologist whose husband has just hit her for the first time. Anthony Dey Craze is a famous rapper from Ghana with a way of working magic with a beat. Agu is a soldier, still bleeding after a failed attempt to stop squadmates assaulting a woman. Each felt drawn to the beach.

Adaora asks their new friend to call herself Ayodele. There is “something both attractive and repellent about the woman”, who they discover is a shapeshifter. She is polite and pleasant, but quite clear on the fact that her people will not be leaving: “No. We stay.” The world has changed, and the question is how to adjust, how to survive, not how to put things back how they were. They take her back to Adaora’s home, but barely have time to talk before word gets out.

Adaora’s babysitter sends a video of the alien to her sketchy boyfriend Moziz, and he recruits friends to plan a kidnapping. One of them shows the video to the Black Nexus, a LGBT group of which he is secretly a member, and so on. Soon there is a huge and angry crowd outside the house. Meanwhile, the government, near paralysed by the absence of the president – secretly recovering from heart surgery in Saudi Arabia – does little to investigate what’s happening in the bay, or to protect the city and its inhabitants. As Lagos falls prey to riots and chaos, Adaora, Anthony and Agu realise what they must do.

The characters through whose eyes we see these events are likeable but not paragons, and always interesting to spend time with, especially the alien Ayodele, who is at first unthreatened and amused by the humans she encounters. “You people have your own… little inventions,” she says, upon seeing Adaora’s new computer; she giggles, “a creepy dovelike sound that raised the hairs on Adaora’s arms”. The grating noise that accompanies her transformations, “the sound of metal balls on glass”, reminds us to fear her.

The dialogue of some characters, in particular Moziz and his gang, is presented in Pidgin English, making it a bit difficult to understand at first. He says about the aliens: “Well, if dem get flying ship, wetin again dem get wey we no sabi?” But readers who persist will get the hang of it; even those who (like me) fail to realise there is a glossary at the back. In any case, science fiction readers shouldn’t be put off a book by a few sentences in an unfamiliar language.

Two thirds in, the book takes an unexpected turn. It would be unfair to give away its surprises, but these sequences provide some of its most frightening images, as the alien disruption of our reality intersects with another, older disruption – and it’s all being filmed on phones and uploaded to YouTube, which keeps it grounded. People in the most terrible danger are still pleased to see their hits piling up.

As the book approaches its conclusion, some readers may wonder sadly if the swordfish introduced in the prologue ever returns. Forget guns on mantelpieces, don’t put giant sea monsters in the first few pages unless they’ll be back to cause havoc. It does return eventually, and it does cause havoc, but don’t expect this book to spend very long at sea. It’s a story of the city, of the fragility of life in a city where some people live in extreme poverty and the government isn’t paying attention, where one well-meaning nudge can have disastrous consequences.

Lagoon delivers a compelling narrative, characters with interesting pasts, presents and futures, and intriguing alien technology and motivations. For British readers the Nigerian setting may be a novel one, the people we meet in Lagos not those we’ve read about a thousand times before, their perspectives on first contact not those we’re used to seeing. It’s an epic story told in a measured, focused way, that coolly resists the temptation to sprawl, and I liked it a lot. Stephen Theaker

After a bit of editing, this review appeared in Interzone #252, back in 2014.
Posted by Stephen Theaker