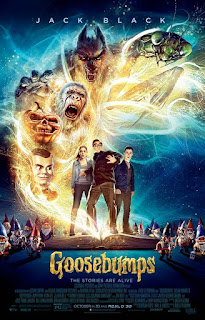 In the 2002 film Orange County, Jack Black plays the drug-addled Lance Brumder who, clad only in his briefs, wanders his wealthy parents’ home. The role epitomizes the take-it-as-it-comes, let-it-all-hang-out California attitude that Black injects into his characters. The strategy has resulted in everything from chummy teachers that appeal to families (School of Rock (2003)) to hell-bent rocker scumbags that appeal to young adults (Tenacious D in The Pick of Destiny [2006]).

This time, Black reprises his penchant for exaggeration as a reclusive and mean-spirited R.L. Stine, the real-life author of the best-selling Goosebumps collection now 62 books strong, in a film of the same name.

True to the Stine canon, the PG-rated film, directed by Rob Letterman, threatens its young protagonists with monsters, but nobody gets seriously hurt. Even a young man pulled through the upper-level window of a gymnasium by a giant praying mantis will later appear in a neck brace.

Though the film foists on the viewer cliché after cliché, Black’s overly impassioned performance is enough to keep viewers engaged in this bubblegum horror/adventure version of Jumanji (1995).

Monster Mash
After the loss of his father, Zach and his mother move from New York City to the quiet suburb of Madison, Delaware. Here Zach meets love interest Hannah and her over-protective father (Black). “You see that fence? Stay on your side of it.”

When Zach believes Hannah’s father may be violent, he enlists new high school acquaintance and bumbling sidekick Champ (short for Champion) to help get to the bottom of it. The duo unwittingly unleashes a monster trapped in one of Stine’s manuscripts. This incident kicks off the action that drives the rest of the story.

The remainder of the film isn’t hard to predict. More monsters escape from their textual prisons. Stine and the kids try to stop a growing monster posse without being eaten, crushed, stabbed, clawed, etc. Meanwhile, Stine’s true intentions and vulnerabilities are revealed. The film culminates in a high school dance turned monster mash in a frenzy comparable to (though not quite as entertaining as) that in Pixels (2015).

The Black Side of Goosebumps
Without Black, Goosebumps would have been a dull rehash of the monsters and themes that we’ve seen a thousand times. Black’s performance is most enjoyable in the beginning: the camera zooms in on his bulldog-like face, which contrasts with the fifties-style thick-lensed glasses and the oiled hair. The thin-lipped mouth contortions and the affected super-professorial accent round out the impression.

Even when a gang of creepily animated porcelain gnomes attacks the heroes, Black’s cartoonish physicality entertains.

Though not much beyond Black tickles the funny bone in Goosebumps, it does have its moments, such as when Champ points out to Zach the massive scratch marks in a wall. I’m paraphrasing: “Did you see these scratch marks?” Zach’s sarcastic response: “No. I didn’t.”

The lead book-born bad guy is a dummy named Slappy, voiced by Black. Though Black’s voiceover is well-played, Slappy’s one-liners would make Freddy Krueger and the Crypt Keeper cringe. Moreover, despite his girlish screams, Champ’s antics grow a bit irritating. Nevertheless, I’ve seen excerpts of the child-directed television shows that my nieces watch and I’ve been tempted to knock myself out due to the painfully exuberant (and unfunny) performances of those show’s stars. Champ is consistent.

Though Goosebumps does not achieve the same level of humour and enduring charm as School of Rock, Black’s faulted character again grows from the younger players and vice-versa.

Jack Black brings a Bill Murray mentality to his projects. It’s as if they’re nudging the viewer and saying, “Hey, if you don’t take this film too seriously, then I won’t take this role too seriously. And we’ll have a good time together.” In Goosebumps, we do. – Douglas J. Ogurek ****