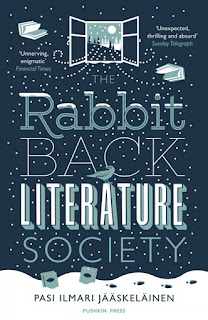 Rabbit Back is a small town in Finland. Its biggest celebrity is Laura White, the famous author of children’s fiction. Where Tove Jansson wrote about the Snork Maiden, Little My and Stinky, Laura White writes about Mother Snow, the Odd Critter and Dampish, who live in fear of the Emperor Rat. Decades ago, she formed the Rabbit Back Literature Society, to which she recruited local children with, in her opinion, the potential to be great writers. She was right. An isolated elite in childhood, they are now successful but unhappy adults, and, thanks to a particularly fine short story which caught White’s eye in the town newspaper, substitute teacher Ella Amanda Milana is about to join their ranks.

Before her new literary career commences, there are mysteries to be solved.

Someone has been tampering with the library books. In the versions held at the local library, Aslan bit off the White Witch’s head instead of sacrificing himself, and Josef K. helped Mersault escape from prison. Why does the librarian destroy these astonishing curiosities? What happened to the other child from the society, the one the others won’t talk about, and the notebook of ideas he carried everywhere? Dogs congregate in the front garden of Martti Winter, the overweight loner with whom Ella begins an odd relationship. Laura White went missing on the night of the big party at her house. Why is she now haunting everyone’s dreams, “her voice … the most awful thing, like rustling dry leaves”?

Most importantly, what is The Game these authors play, and what are its rules?

Ella, who makes it her business to discover all the answers, is an interestingly flawed, selfish and manipulative protagonist. She steals books, discloses secrets, breaks into houses and barely hesitates to apply Rule 21 of The Game – which allows torture – because “once you had the other person in your clutches, like a predator, it was easier to temporarily abandon common courtesy”. Her reason for using The Game to persuade society members to “spill” their secrets isn’t justice or truth, but her academic ambition. The question for her isn’t whether she should make their dirty linen public, it’s whether she has enough in hand yet to make it worthwhile.

The novel presents a sour view of writers as scavengers picking over the bones of the dead and living alike. Laura’s advice to her young protégés was to “learn to look at everything as if you weren’t even part of the human race”. In another passage Ella imagines her fellow writers perched on a store’s shelving, swooping down to catch their prey: “I don’t know if you noticed, but this woman has a very interesting way of talking to people,” says one. “I just had to have it. I’ll probably throw the rest away.”

What happens in The Game is a ruthless mining of each other’s psyches for unfiltered, utterly honest material. It is the secret of their success, but has left them raw and wounded. “Thinking might be fun at first, but then you got hooked on it. ... Excessive thinking was eating writers away from the inside out.” Contentment is described here as an evolutionary hiccup, Martti Winter believing that “the happiest people were the ones who existed as little more than dimly conscious food-ingestion devices that enjoyed the occasional orgasm”.

It is impossible to know how good a translation is without reading the original, but one can judge the translation as a piece of writing in English, and on that basis Lola M. Rogers has done a fine job. The book reads very well, aside from the use of the old-fashioned word “authoress” to describe Laura White, and passages reliant on grammar and punctuation, often tricky for translators, pass by without a hiccup – such as a mention of the subjunctive, and Ella’s mulling over the significance of an absent comma in the sentence, “It’s so nice to meet the new tenth member of the Society.”

Not everyone enjoys stories about writers – is there a less inspiring, less inspired way for a short story to begin than with a writer at their desk? – and the way writers are shown here may feel self-importantly pompous or rather unpleasant to some readers, depending on their point of view. But readers who love stories about writers and writing, who like their mysteries with a dash of fantasy, will enjoy it immensely. If possible, read some Moomins first, to get a good sense of the adorably terrifying corners of the Finnish imagination being here explored; this fascinating novel will repay the effort.

Pasi Ilmari Jääskeläinen has been described as “Finland’s best-kept literary secret”. Well, that secret has now been spilled. No torture required. Stephen Theaker

After a bit of editing, this review appeared in Interzone #250, back in 2014.
Posted by Stephen Theaker