Child of a Hidden Sea (Tor) by A.M. Dellamonica | review 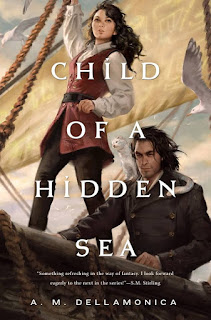 Sophie Hansa wants to know why her birth parents put her up for adoption as a baby, twenty-four years ago. She wants to establish a relationship with them. She has a lovely home life, and she adores her adoptive parents and her super smart brother Bram, and maybe it wouldn’t seem so urgent right now if she wasn’t trying to avoid defending her PhD thesis, but she’s got her heart set on it and that’s going to get her, and everyone else, into a lot of trouble.

Stormwrack as a watery planet, even in comparison to our own. The common language is Fleetspeak, spoken by the seagoing folk of two hundred and fifty island nations who gather together in the great Fleet. Things have been quite peaceful for the last century, thanks in part to Temperance, a ship so powerfully magical that its captain can sink any other ship simply by saying its name. You can see how that might bother people with plans of world domination.

These worlds collide after Sophie traces her birth mother Beatrice Vanko to San Francisco. The reunion goes badly. Beatrice wants nothing to do with her and is horrified by the mention of her father. Sophie doesn’t give up. Maybe her spider-sense is tingling, maybe she’s just avoiding that viva, but she stakes out her mother’s house for three days, sleeping in her car, and she’s there when her Aunt Gale gets stabbed by two men.

Leaping to assist, Sophie is dragged in a whirlwind to Stormwrack. That’s where her mum was born, as she’ll soon find out, but her first priority is keeping her aunt alive while swimming a mile to the nearest fishing grounds. And her second priority is to start studying the animals in this odd new world. Giant moths migrating over the ocean and seagoing bats (one of which sits on her head while chomping on a moth) are just the beginning of the treasures Stormwrack offers the curious biologist.

Through accident and inheritance Sophie has to investigate the attack on her aunt, who was a Fleet Courier. Well, she doesn’t have to, exactly. In fact, everyone would rather prefer it if she returned to Erstwhile (as they call our planet/time/dimension) and leave her half-sister to claim the mantle of Fleet Courier and get on with the investigation. Yes, she has a sister, and she has as little time for Sophie as their mother. Sophie sympathises, but staying home would mean giving up the chance to see Stormwrack.

Sophie is a likeable character on whom to hang a novel. She’s endlessly curious, physically brave, capable and clever. She can climb mountain cliffs, scuba dive, and work her way through a legal argument. She's the polar opposite of all those fantasy whiners who ever found their way to a magical land and didn’t stop moaning till they got back to their mundane lives. She embraces the opportunity, can’t wait to see what’s out there, and she’s always thinking.

When she does get sent home to San Francisco, she tells Bram all about it. He’s not totally convinced by her blurry photo of a sailboat, but she doesn’t get into a huff about it - she understands that it’s just a matter of evidence. So she prepares to return. She maxes out her credit cards to buy a video camera, a top of the range phone, a solar-powered charger, and diving equipment. Later on, she finds a way to smuggle her phone back to Earth - to sync her data!

You can’t blame her for wanting to take lots of photos, because Stormwrack is a cool place to visit, even if she does have to deal with some nasty villains. They are using weapons from Erstwhile, which gives her a slight edge - unlike her new friends, she knows grenades are dangerous. But the bad guys are also using magic, and she has a lot to learn about that. Names are the thing when it comes to magic in Stormwrack, and like many a middle school child she has made the mistake of revealing her middle name.

Of course the attack on Aunt Gale was part of a deeper plot, and as Sophia dives to the bottom of that she kicks up trouble for her own family. There’s a reason she was given up for adoption, and it wasn’t that mum and dad couldn’t afford to keep her. But despite the marital problems, the monsters and the mayhem, this is on the whole a jolly book about a rootworthy protagonist, with a good-looking supporting cast and a balmy setting that give it a holiday feel. Just the thing for reading during a rainy British summer! Stephen Theaker

After a bit of editing, this review appeared in Interzone #253, back in 2014.
Posted by Stephen Theaker