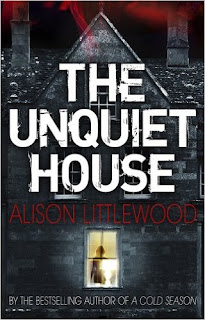 The Unquiet House (Jo Fletcher Books, pb, 304pp) is the third published novel by Alison Littlewood, and is at first reminiscent of the others: a modern setting, an unhappy woman who becomes isolated, a bit too much italicisation, short chapters, an accessible style of writing, and a sense from the off that things aren’t quite right and the protagonist is in danger. However, the middle of this book takes us into the past, and for me that’s where Littlewood’s writing really shines, her terrors perfectly suited to a world without the internet, mobile phones and cheap transport away from a dangerous situation – there’s no need to contrive their absence, she can just get on with scaring the life out of us.

But we begin in 2013 and Emma Dean has inherited Mire House, a big spooky place in Yorkshire. It came down to her from a distant relative she had never met, the elderly Clarence Mitchell. This happens five months after her parents died, which is of course the perfect time to move into an old house with too many rooms. She has a crack at decorating, with the help of Clarence’s grandson, Charlie, who turns up uninvited. He can’t be up to any good, we feel, especially when he rings in sick to work for her without being asked, but Emma’s glad of the company.

No wonder, given what Mire House is like – in a place like this you’d be glad if Piers Morgan turned up with a packet of biscuits and a cup of tea. A creepy old man in a worn-out suit stands at the foot of Emma’s bed, staring with doleful eyes and later telling her to leave. Muddy footprints appear on the floor, accompanied by the sound of children’s laughter. The rumpled suit in the wardrobe seems to rustle on its own, and finds its way back upstairs after Emma throws it out. A grim woman in black, her face veiled. Is it all supernatural, or is it Charlie messing with her, trying to force her out of a house that should have been his?

All these scenes are handled well, though it’s hard to get as engrossed as you’d like in such short chapters. The book truly takes off once we’re back in 1973, where we meet Frank, an eleven-year-old boy with a little brother, Mossy. They hang around with Jeff and his big brother Sam, a twelve-year-old lout with streaks of mean and chicken. Sam dares them to approach Mire House, where one old man lives alone, and later to go in. When Frank shows himself the bravest of the group it sparks a fury in Sam, a dangerous determination to teach Frank a lesson.

The chapters in this part become longer, excruciatingly so, since you won’t know if the boys are safe or not till the end of each one. The relationships between the boys are so believable, their interactions so miserable, the kind of dangers into which they got so familiar from my own childhood – though in my case the expedition was into a crack in the wall of an abandoned mill – that reading this part left me struggling with retrospective guilt and anxiety.

We then go back to 1939, the year when Aggie hopes to enter into service with Mrs Hollingworth, leaving behind the back-breaking work of her parents’ farm. But there is a disaster: Mrs Hollingworth’s pregnancy didn’t make it to term. She declares that the newly-built home will contain “no laughter, not light, no life” and “no children, not ever”. Later, Mr Hollingworth moves in, with a new wife, and they take in children displaced by the war. There for a party, Aggie gets to know the children; they can see a grim woman in black, standing in the church grounds, beckoning them to follow her towards the mire.

Thus we return to 2013 with a better idea of what has been happening to Emma, and fearing the worst if she stays.

There is nothing new about haunted houses, or indeed stories that show us the same place in different times, but the characters here, Frank and Aggie especially, are so well-drawn that their anguish and terror feels like your own. The scares are emotional, but also physical and tactile. Emma gets a push in the back at the top of the stairs, while Aggie runs into an unknown figure’s arms in the dark, in a scene that conveys perfectly just how dark and terrifying it can get in the thick of night on a country road. By about halfway in I had to start reading the novel by day because it was spoiling my sleep.

All of Littlewood’s novels have been good, but this is my favourite: I suspect a novel set entirely in the past would be even better. Just not about young brothers in Yorkshire in the seventies next time. A whole novel like that and I’d need therapy. Stephen Theaker

After a bit of editing, this review appeared in Black Static #43, back in 2014.
Posted by Stephen Theaker