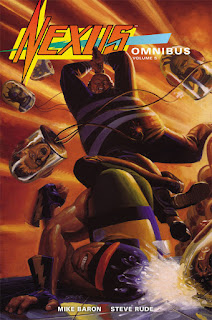 JLA, Vol. 5 (DC Comics) by Mark Waidand Bryan Hitch. A disappointment. I love the JLA, and Mark Waid has written some terrific comics, but this just doesn’t work. The stories lack decent villains, and the heroes have lost all the sharpness of the Grant Morrison run. I don’t know what went wrong here. **

Nexus Omnibus 4 (Dark Horse Comics) by Mike Baron, Steve Rude and chums. Much more fun than previous volumes. Nexus himself is far less tortured and conflicted, and heads back to the bowl-shaped world to find a god who might be able to prevent the collapse of Gravity Well, an unstable power station built on a black hole that could destroy the solar system. A band of youngsters from Ylum become huge rock stars, jockeying begins for the presidential elections, and the three girls who pledged vengeance after Nexus executed their father continue their search for enough power to kill him. The backup stories are now all about Judah the Hammer, a huge improvement. The artwork and design is as ambitious and colourful as the stories. My favourite Nexus book yet. ****

Nexus Omnibus 5 (Dark Horse Comics) by Mike Baron and chums. Horatio Hellpop has had enough of being Nexus, and leaves Ylum to find himself. So the insane alien Merk grants his power to other candidates, including three vengeful sisters and a musclebound professor. Les Dorscheid’s colouring maintains a consistent look despite a succession of guest artists, but with Steve Rude largely absent this book isn’t as stylish or distinctive as earlier collections. ****

Nexus Omnibus 6 (Dark Horse Comics) by Mike Baron, Hugh Haynes and chums. Alien taskmaster the Merk made Stanislaus Korivitsky the new Nexus, but it’s a poor choice: he likes the killing way too much, and when the Merk’s power runs out Stan will team up with the Bad Brains! Original Nexus Horatio Hellpop will have to come out of his retirement to take him down. The art on this one has some very shaky moments, but once Hugh Haynes becomes the regular penciller it settles down a bit. Reading these six omnibuses has been a terrific experience, watching Ylum develop into a full-blown society, inching its way forward, making mistakes, trying to balance the varied demands of a growing population. A great science fiction adventure. ****

Orbital, Vol. 1: Scars (Cinebook) by Sylvain Runberg and Serge Pellé. A pair of novice special space agents are despatched to Senestam, a moon of Upsall, to resolve the conflict between human colonists and the aliens of Upsall, who would quite like their moon back now that valuable minerals have been found there. Excellent art, and an interesting story, but it is bafflingly split across two slim volumes and the matte printing is unattractive. ***

Orbital, Vol. 2: Ruptures (Cinebook) by Sylvain Runbergand Serge Pellé. The story concludes. £7.99 seems like quite a lot for a 56pp comic. ***

Queen and Country: The Definitive Edition, Vol. 2 (Oni Press) by Greg Rucka, Jason Alexander and Carla Speed McNeil. Collects three excellent stories about spy Tara Chace and her fellow Minders in the SIS. Like the MI:6 equivalent of Spooks. *****
Posted by Stephen Theaker