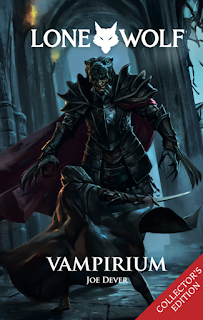 Lone Wolf 27: Vampirium is the seventh (of twelve) gamebooks in the New Order series of the Lone Wolf cycle of thirty-two, all but one of which have already been published although the majority remain out of print (1 to 29 can be played online, at Project Aon). I won’t bore regular readers with details of either the cycle or its publication as they are described at length in my reviews of books 21, 22, 23, 24, 25, 26, 29, 30, and 31, all available on this blog. Vampirium is also Holmgard Press’s eighth publication and maintains the high standard of production values begun with Lone Wolf 29: The Storms of Chai. The New Order series turns away from protagonist Lone Wolf to focus on a new member of the Kai order, Sommerlund’s warrior elite, and combines standalone with campaign adventures. Vampirium begins a campaign that is continued through gamebooks 28 and 29, despite the elapse of nineteen years of real time and seventeen years of game time between the latter two. The adventure begins three months after the conclusion of Lone Wolf 26: The Fall of Blood Mountain and sees Grand Master True Friend (of randomly-generated-name-fame) once again pitted against the agents of the evil deity Naar.

The Kai have received a second request for assistance from the Kingdom of Siyen, which borders on the Doomlands of Naaros and was last visited by True Friend a year ago in Lone Wolf 23: Mydnight’s Hero. The King’s Ranger Regiment have been keeping an eye on an incursion into the Doomlands by Autarch Sejanoz, the three-thousand-year-old monarch of Bhanar, which also shares a border with the barren wasteland that was formerly ruled by Agarash the Damned, Naar’s most powerful servant on Magnamund. The rangers report that a squad of the Autarch’s Imperial Guard have found the Claw of Naar, a wand of great malignance, and are in the process of returning it to Bhanar. The Siyenese patrol consists of only four rangers and True Friend is dispatched post-haste to rendezvous with them and take possession of the Claw once the ambush is launched. The insertion is as smooth as it is speedy and the adventure begins with True Friend’s rendezvous with Ranger Captain Gildas in Sunderer Pass, courtesy of Lord Rimoah’s flying ship, Cloud-dancer. The narrative that follows is divided into three parts, the first of which is a wilderness adventure. The ambush is only partly successful and True Friend must first pursue the surviving guardsmen, then recover the Claw, then flee from the guardsmen, and then pursue them again when he loses the claw. The second part is an exploration of the town of Yua Tzhan and its military barracks, from which the Claw must be stolen. After fleeing from the town, the final part of the narrative begins when True Friend discovers that the Autarch has cut his party off from escape to the sanctuary of Chai by sending an army to the Anfeng Forest and occupying the border town of Zuda. In what remains of the mission, True Friend must either break or sneak through enemy lines to reach the Chai Wall, where Cloud-dancer awaits.

The gameplay of Vampirium is curious and distinct from any of the previous adventures. As my summary of the narrative suggests, the game begins with an action set-piece in the ambush and then consists of an exciting series of pursuits and flights. There are, however, very few combats that employ the Combat Results Table in the method regular players of the cycle have come to expect and enjoy. My first combat was after leaving the Vanchou Forest (late in the first part) and that was only because I decided to stop and fight rather than continue fleeing. I only fought two more combats in the remainder of the gamebook and it is testimony to the late Joe Dever’s skill and expertise in game design that the lack of combat did not detract from the suspense and satisfaction of play. I found the New Order Kai Grand Master Disciplines of Animal Mastery, Assimilance, and Elementalism particularly useful. It is probably also worth noting that once one reaches Yua Tzhan, there is a great deal of luck involved and a bad day on the Random Number means one may well find that: ‘Tragically, your life and your mission end here…’ In consequence, the adventure is both exciting and difficult to complete without having to restart at least once.

The bonus adventure is ‘Shadow Stalkers’, which is written by Florent Haro. The player character is Captain Ernan of the 1st Kirlundin Isles Marine Cassel, part of the armed forces of the kingdom of Sommerlund, the homeland of both Lone Wolf and True Friend. The narrative moves forward in time to the ‘present’ of the cycle, the year MS 5103, which is eighteen years after the events of Vampirium and in between Lone Wolf 31: The Dusk of Eternal Night and Lone Wolf 32: Light of the Kai (due for publication shortly). I think this was a good idea, serving to remind players that the cycle is building to a climax four decades in the making, but I was disappointed by the adventure itself. I have two criticisms. First, my initial reaction was that for a short gamebook (it is exactly half the length of Vampirium), it took a while to get going, with several lengthy and consecutive sections of description before there is any gameplay. This tendency continues throughout the gamebook, however, with the result that my criticism is precisely the same as that I reluctantly levelled at The Dusk of Eternal Night: it is more like an experimental young adult fantasy novella than a gamebook and while many readers may like this format, I have always ‘played’ rather than ‘read’ the series. The second criticism is completely different, but also concerns gameplay. Ernan’s equivalent to the Kai Grand Master Disciplines are the Kirlindun Marine Skills. As one would expect, several (two of six) of these skills are sea-based. Given the player character’s profession and skill-set, a surprising – and, for me, disappointing – proportion of the adventure takes place on land.
Posted by Rafe McGregor