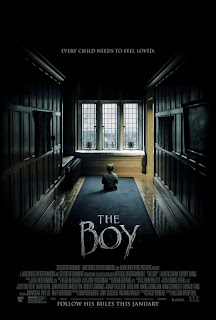 Just when you thought the creepy doll approach had run its course, along comes Brahms.

Years ago, Mr. Heelshire, having imbibed one too many spirits, described his long-deceased son Brahms with a single word: “odd”. Such is the tone that characterizes The Boy, a film about a doll that may or may not embody the spirit of its namesake, who died in a fire at age eight.

Though it hit theatres in January, a month notorious for horror duds, The Boy is good. It’s better than good. Directed by William Brent Bell, the film offers a creepy antagonist and some genuinely freaky experiences. It’s less about jump scares—there are a few—and more about lingering unease.

Gretta Evans, fleeing an abusive ex-boyfriend back in the States, takes on a live-in nanny job at an English manor. It isn’t long before the property’s elderly owners (the Heelshires) reveal that their beloved son Brahms is a porcelain doll.

“If you’re good to Brahms, he’ll be good to you,” says Mr. Heelshire. “If you’re bad–” Mrs. Heelshire doesn’t let her husband finish. So the couple takes off, but not before the missus whispers to Gretta, “I’m so sorry.” Thanks for the vote of confidence!

Gretta, equipped only with her own skepticism and a list of “rules” ranging from “Never leave Brahms alone” to “Kiss goodnight”, throws a blanket over Brahms and calls it a day. She soon learns that something is definitely up with that doll.

Brahms’s antics begin with subtle mischief and gradually escalate, while Gretta’s human interactions are limited to calls with a friend back home and the occasional exchange with love interest Malcolm, the Heelshires’ “grocery boy”.

Is He Alive, or Isn’t He?
Doll antagonists like to go berserk. Think Chucky, or the even more extreme tribal doll from Trilogy of Terror (1975). Brahms, on the other hand, takes the opposite approach: he remains motionless. It’s when you can’t see him that Brahms does his thing. Thus, he achieves a much higher level of menace than his dynamic counterparts.

The Boy casts its spell by keeping us on the fence. Is Brahms endowed with supernatural powers? Or is he some elaborate hoax?

Then there’s the doll’s appearance. Brahms isn’t ugly, nor is he done up in vivid colours. Rather, with his pale complexion and deep brown eyes, Brahms represents the over-protected, shy schoolboy. He is proper . . . fragile even. He might also be champing at the bit to cause some mischief.

Often the camera lingers on the doll’s face to bring discomfort to the viewer. Is that thing going to blink? Will it move its little arm?

A Little Dickens
The Boy starts slow, lulling the viewer into a tea and biscuits (with some red herring) atmosphere. It reminds me of the quiet films that supported my high school and early college readings of nineteenth century British literature. There’s the manor with its classical architecture and ornate interior woodwork. There’s the garden and the statuary.

However, Brahms Heelshire plays a much different tune than the Brahms (Johannes) that was Dickens’s contemporary.

Whether the filmgoer approaches it with a “figure it out” or an “in the moment” mentality, The Boy offers an experience as memorable and unsettling as the “tink tink” of a finger tapping porcelain. – Douglas J. Ogurek ****