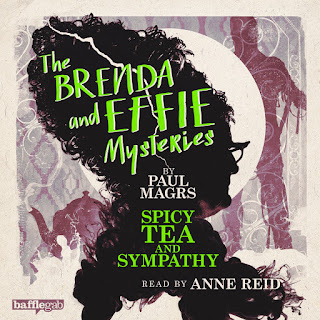 Brenda, former bride of Frankenstein, tells most of this third story while strapped to a table in the murky underground base of a villain. Her blood is being drained and infused with a special tea, in hopes of bringing a dried-up corpse back to life. The situation dredges from the depths of Brenda’s imperfect memory the events of a night in the fifties, when she worked as housemaid to Professor Tyler. He is one of the Smudglings, a group of fantasy writers much like the one frequented by C.S. Lewis and J.R.R. Tolkien. One of their meetings was disturbed by the attack of a mummy, who made off with their best tea set and all of its contents. In the present day this is somehow connected with the Tipple teahouse (and massage parlour), owned by international traveller and explorer Professor Marius Keys, of whom Brenda says “everything about him speaks of quality and polish”, a phrase that would be even more apt in description of this series of audio plays. Anne Reid is terrific as Brenda, bringing both the sweetness and the toughness that the role requires, and the writing is a constant delight, full of detail, care, specificity, and ideas. Effie sounds uncannily like Sarah Millican, which makes me smile every time she speaks. From the moment the now familiar theme music plays, you know it’s going to be good. Stephen Theaker ****
Posted by Stephen Theaker