The Brenda and Effie Mysteries: Brenda Has Risen from the Grave, by Paul Magrs (Bafflegab Productions) | review 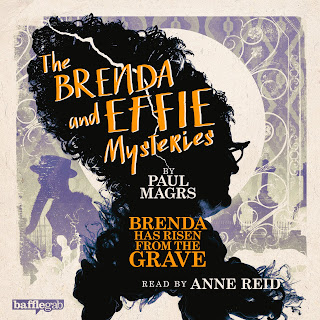 Effie might be in love, “in a whirlwind of amour” in fact, with a man named Keith, who has an elephantine proboscis upon his face. Brenda, former bride of Frankenstein’s monster, doesn’t like Keith, and that leads to a fall-out with Effie, who even stops opening her little shop. As she worries about her friend, memories return to Brenda of another old friend, Joseph Merrick, known as the Elephant Man back when they were in a travelling circus together. She was the Half-Dead Woman, who could let her stitches loose and horrify the crowds by wriggling her bits when they weren’t attached to each other any more. She was a callow young thing then, less than a century old, and just like Effie she didn’t listen to the advice of a well-meaning friend when she should have. What’s more, women were being killed back then, and they are dying now as well in a very similar way. It’s too soon for Brenda and Effie to go their separate ways. We learn much more about Brenda in this story (at least those of us who haven’t read more than one or two of the original novels yet). She has been in the course of her long life “a graverobber, a vagabond, a woman of ill repute, a warrior, a witch, a handmaiden to a queen, a sorcerer’s assistant, a lady pirate” and one suspects that isn’t all, but what she needs to be in this fourth story is a good friend, and perhaps she’s better at that than anything else. Another entertaining story, though it’s rather less light-hearted than earlier instalments. Stephen Theaker ***
Posted by Stephen Theaker