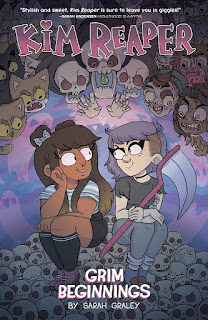 I did not enjoy this very much. Our protagonist, unfortunately, is not Kim Reaper, the young grim reaper on the cover with purple hair and an undercut, but Becka, the other young woman, who has a creepily intense crush on Kim at the beginning of the book and by the end of it is in a creepily controlling relationship with her. We’re obviously meant to think Becka is very cute, from the way she is drawn and, for example, portrayed with love hearts all around her, but she acts like the bad boyfriend in any teen romance. The very first time Becka interacts directly with Kim is to stop her doing her job. As soon as Kim realises who she is, she says, “Wait, are you the girl who’s always staring at me? ’Cos, like, it’s kinda weird and you need to stop.” It’s a fair point! When Kim says her job is to be a reaper (albeit only collecting the souls of animals so far), Becka immediately tells her to get a job working at a bakery instead. After Kim stresses the importance of her job, Becka keeps asking her for drinks, over and over, despite Kim not responding to the invitation the first, second or third time. And when Kim takes her to an undersea shipwreck Becka ignores Kim’s instructions: she tells her to be quiet again and again, and then when things go wrong Becka blames Kim and demands again that she quit her job. Later, when Becka’s male friend meets Kim, his red-faced anger at her is repulsive. But the book isn’t all bad. The art style is likeable, there are some cute moments, Kim herself is quite cool, the cat owner they tangle with is genuinely bizarre, and the last chapter takes an interesting turn. I’d read more about Kim, but not about Becka. Stephen Theaker ***
Posted by Stephen Theaker