The Rise and Fall of the Trigan Empire, Volume I, by Mike Butterworth and Don Lawrence (Rebellion) | review by Stephen Theaker 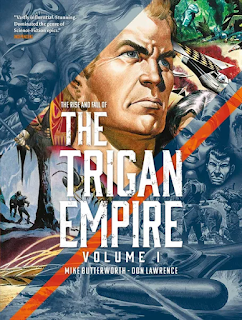 This book collects stories of the Trigan Empire which appeared in Ranger from September 1965 to June 1966, and then Look and Learn from June 1966 to May 1967. Although Look and Learn and the strip continued to run till 1982, I first encountered it in the 1978 Hamlyn collection, lent to me for one glorious night only. As with many classic British comics, the copyright is now held by Rebellion, publishers of 2000 AD and the Sniper Elite games, who have published this chunky collection as part of their Treasury of British Comics.

This is, essentially, a tale of the Roman Empire, if it had come into contact with more technologically advanced civilisations early in its development and still managed to come out on top, accelerating them through what for us were two thousand years of changes in the space of one man’s lifetime: Trigo, destined to become an emperor. This is adventure in the classic style, as we see the founding of their city, battles with monsters, and the wars they must fight against predatory neighbours.

It’s written by Mike Butterworth (not the Michael Moorcock collaborator of that name), with wonderfully illustrative artwork by Don Lawrence. Every panel looks amazing, like the Ladybird books of the seventies, with a succession of distinctive faces, locations, creatures and vehicles. It doesn’t always read as well as it looks, since it’s not always clear in which order panels and dialogue should be read, but that’s forgivable.

Reading it now, I realise that the stories aren’t perhaps entirely original, or to put it another way, I now understand why Gods of Mars felt so familiar when I read it. There are some slightly old-fashioned aspects to it. And it’s frustrating that the Trigans can be such dunderheads, constantly being conquered or fooled or having their minds controlled. It’s baffling that Trigo ever makes his brother deputy emperor when he knows just how useless he is.

But the yo-yo fortunes of the empire inspire endlessly thrilling escapades – rescues, sneak attacks, plots, plans and desperate searches for allies – so it would be daft to complain about that aspect too much. I loved it from start to finish. And it’s a very solid read: 304 pages long, but it’s like reading an omnibus of French albums rather than whizzing through an American comic. I can’t wait to read the rest of the saga at last. Stephen Theaker *****