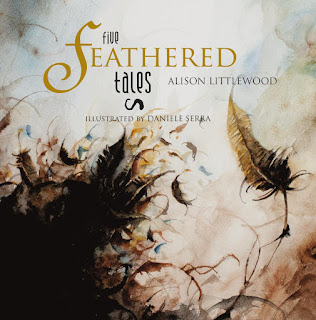 Five Feathered Tales (Short, Scary Tales Publications) is a collaboration between Alison Littlewood and the award-winning artist Daniele Serra. A luxurious picture book for adults, rather like the Dave McKean edition of Ray Bradbury’s The Homecoming, it publishes five of Littlewood’s excellent short stories with over two dozen fully-painted illustrations by Serra. What’s more, there is also an introduction by the highly esteemed Peter Tennant, a name perhaps familiar to Black Static readers.

Each story features a feather of a different colour – black, blue, golden, brown and white – but the stories are far from as charming as that might make them sound. “Black Feathers” takes us back to territory familiar from The Unquiet House, where siblings quarrel and put one another in all too believable danger. There’s a little brother, a rope swing, and a sister who makes him a cloak of feathers… It’s almost too excruciating to read.

“Golden Feathers” is about Azusena, another girl with a little brother. When she threatens to hit him, a golden bird appears in her hand. This power comes to the attention of the Sultan, who realises that she can reveal the intentions of his enemies. “Blue Feathers” is another story of magic: Andy goes to the circus, where he is disappointed at first by the lack of real magic. Then he notices how much attention his grandad pays to a young female magician, and comes to realise that there’s more to his world than meets the untrained eye.

If the book has sold out by the time you read this, “White Feathers”, about a girl who appears to be oddly changed by a feather she places under her pillow, will appear in Best New Horror 28, and for me that’s not even the best story. That would be “Brown Feathers”, an outstanding science fiction or fantasy tale about the dwellers of buildings whose windows are deliberately obscured by the so-called outwallers. Young Mellor takes part in a sortie, but gets stuck out there among his enemies. The image that will stick with readers is of his friend Luce staring at a tiny patch of window, hoping to see a cloud, only for an outwaller to smear muck over it.

Five Feathered Tales is a remarkable collection, the unsettling mood of its stories perfectly enhanced by Serra’s eerily fluid illustrations, which feel as if they might start flowing off the page if you don’t pay enough attention. The book reflects Alison Littlewood’s ability as an author to turn her hand successfully to many genres and styles. That talent might make it hard to identify in the novels a distinct narrative style, but the themes are consistent and compelling: children in danger, broken family relationships, the dangers of the past, and the warnings buried in myths and legends.****