A Rainy Day in New York | review by Stephen Theaker 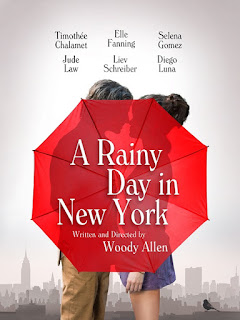 This is effectively an English-language remake of the To Rome With Love storyline about a young couple who get separated for the day, the woman meeting a film star, the man inadvertently meeting an escort. And it does for New York and its tourist board what To Rome With Love did for that city, giving those of us in lockdown a vicarious holiday in the process.

Elle Fanning is hilarious and sparky as the ambitious and self-possessed 21-year-old journalist whose quest for a good story brings her into contact with a trio of foolish older men in the film industry. (Only an imbecile could watch the film and think Woody Allen approves of these buffoons and their clumsy attempts to woo her.)

Meanwhile Timothée Chalamet noodles around the city while he waits for her, and bumps into the younger sister of an old girlfriend. The actor’s public betrayal of the film’s director works well for him in this role; it made it easier to believe that this boyish chap was, as the film puts it, attracted to the demi-monde.

I thought this film was absolutely charming. Some newspaper reviews have complained about its nostalgic tone, forgetting that the narration begins with Woody Allen playing a much older version of Chalamet’s character; this is 2018 as it might be fondly remembered in 2078 (hence it qualifying, just about, for a review in TQF). I was also somewhat baffled by a reviewer who claimed that for Chalamet’s character to be a poker-player was anachronistic; I hadn’t heard that people had stopped playing.

As usual people who haven’t seen any Woody Allen films except Annie Hall will say it’s not as good as Annie Hall, but personally I tend to prefer his later films.

One trick I liked here was that new characters were rarely introduced with a close-up: we saw them from a distance, meaning that we met the character before realising it was, for example, Jude Law. Stephen Theaker ****