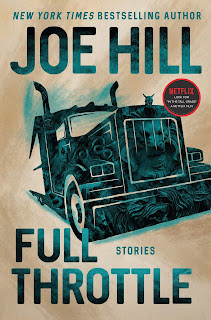 Hill conjures another masterwork of genre fiction with a literary bent.

“I’m always ready to see Another Marvelous Thing. Are you?” So says the narrator in “Late Returns,” one of thirteen stories in Full Throttle. That narrator’s comment relates to the magic of books, but it’s also author Joe Hill’s invitation to readers to drop their concerns and come along for a ride . . . and such a memorable ride it is. Are you open to thinking about how different things could be . . . and maybe are? Are you ready to accept that all may not be as it seems?

Full Throttle is a fitting title for Hill’s fourth collection—the stories grab the reader and refuse to let go as the action barrels forward and the conflicts stack up. I was so captivated by one story, “Fawn,” that I ate half my wife’s bagel without even noticing.

Though Hill references “full-throttle” action films and books in his intro, these stories are far from shallow—they plunge far beneath the surface with a potent mixture of themes, backstory, and perspectives, while charming the reader with sensory details (a house that smells like “Bengay and neglect,” for example).

The characters within these tales straddle a wide spectrum. Sometimes, a would-be villain turns out to be a hero. Other times, an ultra-conservative bigmouth—these turn up several times in this collection—surprises the reader with a glimpse of compassion. Some of Hill’s characters undergo dramatic changes. Others seem on the brink of a major shift, but instead revert back to their old ways thanks to Hill’s refusal to conclude every tale on a positive note.

In the introduction, Hill talks about his literary ascent. How inspiring it must have been to see your parents, Stephen and Tabitha King, pounding away at their typewriters and keyboards day after day. Hill reflects on the books his parents would read to him, bumps in the literary road, his pivotal experiences with makeup artist Tom Savini on the Creepshow set, and his switch from more literary writing to horror.

The opening story, “Throttle,” cowritten with Stephen King, is a pedal-to-the-metal ride in which a demented trucker goes after a motorcycle gang. It’s a masterful story that offers intense, brutally violent scenes, but also explores tension between characters.

Don’t start reading “Dark Carousel” if you have something to do—you won’t be able to put it down. The story, which Hill refers to as “a cover” of his father’s work, reminded me of one of the lovely Creepshow 2 (1987) segments called “Old Chief Wood’nhead.” This time, four teens run into a conflict at a carnival and something awful happens as a result. This story exemplifies Hill’s knack for details, especially with the carnival. He writes about the smells of cotton candy, the puke with popcorn floating in it, and the carousel operator’s lips. The “chill factor” of this story is off the charts.

In “Wolverton Station,” a satirical piece about class and capitalism, an idealistic youth turned American corporate scoundrel opens a coffee business that employs children in foreign countries and decimates mom and pop shops. Saunders is the kind of guy who fires a pregnant woman with a dismissive text. His life changes when an atypical passenger sits right next to him on an otherwise empty first-class train car in Britain. Astonishingly, Saunders isn’t afraid to talk back to this rather intimidating character, who has some negative things to say about Americans who think they can bring their moneymaking franchises into other countries.

Brothers Joel and Ben Quarrel (interesting surname) and their friend Gail London discover a dead plesiosaur that has washed ashore in “By the Silver Water of Lake Champlain,” a multi-layered story about our inability to control death. A fog surrounds not only the children, but also the reader (as it relates to our understanding of death). Is the creature, essentially a symbol of death, nothing more than a large rock as the characters initially suspect? Or is it an actual dinosaur? The story, which also takes on loneliness and parental abuse, is at once still and sinister.

“Faun,” a fairy tale version of Jurassic Park, follows a group of trophy hunters who get the opportunity to pursue prey unlike anything they’ve encountered, but there is a cost. This one has everything one could possibly want in a story: characters with depth, plot twists, a fantastical setting, and much more. “Fawn” condemns not only people who perpetuate crimes against the environment, but also those who sit back and do nothing about it.

In “Late Returns,” a man gets a job on a bookmobile, where he encounters some visitors with unresolved issues. He discovers a way to comfort them by letting them borrow books. In the hands of a less capable author, this story would have been a disaster: clichéd, boring, etc. But Hill pulls it off.

“All I Care About Is You” is a sci-fi story that is in some ways Cinderella-like and in other ways, the opposite. The 16-year-old girl protagonist wants to wear a mask that gives her a different face that will impress her friends—it’s like an expensive pair of blue jeans or sneakers today. Hill explores the figurative masks that people wear and the idea of being content with what you have versus always wanting more.

Mal (that means “bad”), the female protagonist in “Thumbprint,” has returned from Iraq, where she and her fellow soldiers did some questionable things while interrogating an Iraqi prisoner called the “Professor.” The story comments on trust and how war affects different individuals.

Paragraphs in “The Devil on the Staircase” look like steps. A little gimmicky, but entertaining nonetheless. After protagonist Calvino commits a horrific crime, he descends an outdoor staircase that purportedly leads to hell. He then meets a boy who gives him a bird that releases a beautiful song every time a lie is told.

“Twittering from the Circus of the Dead” is told in tweets from a teenage girl whose family stops by a circus after a vacation. During the first half of the story, she’s bored to tears and fed up with her mom, but she does enjoy her jokester brother’s antics. Then they stop at a circus and things change… Hill was wise to use tweets to tell the story, which explores the negative impacts of social media.

“In the Tall Grass,” also cowritten with Stephen King, might be classified as “eco horror.” It details the travails of an adult brother and sister who enter a field of tall grass in Kansas with hopes of finding a child they hear calling for help. The first third of the story is superb: the siblings discover that within this grass, direction and distances are skewed. Leap up to see above the grass. A church appears on the horizon in one spot. Leap up again and the church appears to have moved. The prospect of returning to their car grows dimmer. At one point, the reader feels a bit disjointed with what’s happening in the story, but perhaps that’s how getting lost in a field of tall grass would feel.

“Mums” focuses on thirteen-year-old Jack, whose father is a right-wing southern separatist who plans to do something extreme. The story starts strong, but the eventual introduction of supernatural plants speaking in a cryptic fashion is a bit silly. However, I appreciate the point that Hill is trying to make about the nation being divided and the role of the environment in our ascension.

The collection concludes on a note that is both beautiful and frightening in “You Are Released,” a tense story that merges three-dimensional characters and deep meaning. It focuses on an event as experienced by passengers on a flight. Hill releases evidence of the catastrophe not in one massive explosion, but rather in much more frightening fragments. The reader feels the seriousness of the situation and the terror of the passengers. The narration jumps into the perspectives of a diverse cast of characters that encapsulates all the divisiveness, complexity, and potential of humans. Though the action is restricted to the goings on within a single airplane, the story acknowledges that humans are, for better or worse, stuck together.

The stories in Full Throttle are so diverse that it’s hard to fathom that they were written by the same author. Most of them achieve the rare distinction of entertaining on the first read, but also tempting the reader to return to them to discover new insights.