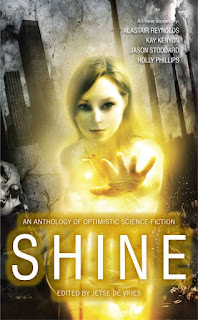 A hopeful change: anthology turns the tables on dystopic sci-fi to shine a light on technology’s role in global healing.

If you’re a little tired of dystopic sci-fi, then awaken to SHINE, for which editor Jetse de Vries challenged writers to explore more hopeful outcomes. Though we hear a great deal about the negative effects of technology, this anthology shows how it can be a means of connecting people and healing our ailing environment. And despite its being more than a decade old (published in 2010), the anthology holds up to the test of time.

Some of the stories might be harder to grasp for the reader who, like me, isn’t much of a tech wizard. I suspect that devoted readers of hard sci-fi will have less trouble with these stories. Nevertheless, the anthology introduces a variety of intriguing inventions. Examples range from ocean bots programmed to collect garbage and robot spiders that help women ascend in a chauvinistic West African village to techwear and nanoparticle soil that uses solar energy.

One theme that repeatedly emerges is control—in particular, mankind’s ability to use technology versus being controlled by it. Eva Marie Chapman’s “Russian Roulette 2020” proposes a flip from using technology for the “Just Nowism” of shallow pursuits to applying it for the benefit of society. The author takes the current dependence on technology to the next level by introducing a group of American kids addicted to devices called ZiSleeves. They visit a special school in Russia that has used technology to benefit the surrounding community. Protagonist MV is the American embodiment of instant gratification, whether that means playing with technology or scoring with young women. Then he meets Rada, a beautiful Russian tech whiz who also likes doing cartwheels and spending time outdoors. Rada, disappointed by Americans for exploiting the planet, advocates taking time to break away from attention-demanding technology to be still.

Though it’s hard to tell what’s happening at certain points in Gord Sellar’s “Sarging Rasmussen: A Report (by Organic),” the story brings up the idea of control again. The men in it begin by using an elaborate digital game to manipulate and bed women, then discover their ability to manipulate people’s minds can make a more meaningful, ecological impact.

Another theme that repeatedly surfaces in SHINE is the critical role that children play in the future of our earth and how teaching them correctly will make an impact. “Castoff World” by Kay Kenyon, for instance, introduces a girl and her grandfather who live on an island floating on recycled plastic bottles while they try to reconnect with humanity. A third major character is Nora (nanobotic oceanic refuse accumulator), the nanobots that recycle materials that pollute the ocean.

Ken Edgett’s “Paul Kishosha’s Children” shows the role art and storytelling can play in teaching children to respect the environment. A scientist gives up his NASA job to move home to Tanzania, where he resurrects a sci-fi children’s story he created at age nine, then uses it to teach children about science, animals, and ecology.

Holly Phillips’s “Summer Ice” is a near-future story that deftly combines art and ecological preservation. The protagonist is a female artist who, in her own way, combats climate change in the unnamed city to which she moves. “During the years of awkward transition from continental wealth to continental poverty,” writes Phillips, “the city’s parks were abandoned to flourish or die.” The artist-protagonist’s creation symbolizes a resurgence of hope in humanity doing its part to improve the environment and instil these values in the next generation.

“Overhead” by Jason Stoddard involves a moon community of 1,300 people who wanted to get away from earth and start a new life. It’s a tense story that shows the benefits of raising youth appropriately.

If you’re fed up with stories about artificial intelligence taking over mankind, then check out “The Church of Accelerated Redemption” by Gareth L. Powell and Aliette de Bodard. Lisa is an American in Paris doing programming for a church that uses AIs to take prayer requests. She meets a Bedouin protestor focused on the liberation and uplifting of AIs. The story also explores the complexities that might occur when a human has feelings toward an AI. Yes, that’s been done before, but the authors here handle it well.

Another impressive story is Jason Andrew’s “Scheherazade Cast in Starlight,” in which an Iraqi narrator reveals how technology can connect people across borders and oceans to fight oppressive governments that restrict people’s views.

“Twittering the Stars” by Marie Ness covers a four-year space exploration to mine iridium for batteries to power millions of vehicles for fifty years on Earth. It’s told in Twitter fashion with the latest tweet at the beginning. The reader is best served by starting at the end and moving backwards. The stream reveals a botanist/microbiologist’s struggles with love, death, and alien life forms.

No story in this anthology has as much over-the-top fun as Alastair Reynolds’s “At Budokan.”

Robots. Dinosaurs. Heavy metal. Is there a better combination? The 12-year-old boy in many male readers will rejoice when he reads this one about how genetic engineering achieves the next level of heavy metal.—Douglas J. Ogurek****