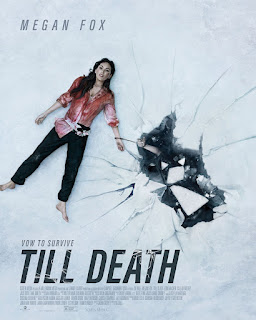 There are two things you can be certain about in Till Death, starring Megan Fox as Emma, a chilly trophy wife who spends most of the film dragging around her husband’s corpse and dropping f-bombs. First, despite all the trials that Emma undergoes in a remote cabin in the middle of the winter somewhere in New York, her makeup will not get ruined. Second, no matter what the plot throws at Emma, her tepid responses will fail to gain the sympathy of a discerning viewer.

Emma’s lawyer husband Mark (Eoin Macken), whom she met when he successfully prosecuted the man who attacked her, is the controlling type – he tells her what to wear and what to order off the menu. Mark, who gives no indication he’s aware she’s having an affair with one of his employees, takes her on an ostensibly conciliatory getaway to a remote lake house to celebrate their eleventh anniversary. Then he dies.

The film, directed by S.K. Dale, offers some of the mysterious note-leaving and brutality of Saw and some of the suspense of the typical home invasion story in which an underdog uses her ingenuity to try to outwit would-be killers. However, Till Death seems to be so focused on maintaining Fox’s Barbie-like complexion that it falls short in other factors. Her robotic performance leaves her cold to her husband, cold to her lover, and unfortunately, cold to the viewer. Moreover, as antagonists pursue Emma within the lake house, one wonders how hard it is for able-bodied men to find a barefooted woman handcuffed to a bloody corpse.

Most log lines about Till Death say something about a woman awakening to find herself shackled to her dead spouse. Not only does the film take too long to build up to that inciting incident, but that description leaves out a technicality that plays into the way the story evolves. Rather than building up to this scenario, a more compelling structure might have started with the handcuffed spouse discovery, then shifted between Emma’s more well-defined past and her attempts to escape.

The most interesting, albeit weakly explored, facet of this film is the concept of the beautiful young woman kept as an object by an older, wealthier man. Perhaps Till Death would have been much better if its makers dropped the horror aspirations and injected Emma with more backstory, depth, and life.—Douglas J. Ogurek **