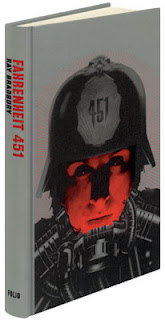 Reading The Island of Doctor Moreau a year or two ago I was struck by how it wasn’t about what I had thought it was about: the animals are made humanoid by way of plastic surgery, rather than forced mutation or cross-breeding. Because these books are so famous, because we encounter references to them at every turn, we feel we understand them without reading them, and that often isn’t the case.

I’d always thought Fahrenheit 451 (The Folio Society, hb, 176pp) by Ray Bradbury to be a novel about censorship, and to some extent it is. The firemen who burn the books do work for the government. But to a greater extent it’s a novel about dumbing down, the numbing effect of mass entertainment, and—this came as a real surprise—political correctness gone mad.

Guy Montag is a fireman who is wobbling. He’s starting to save books he should be burning. Fire chief Beatty can tell—he’s seen it before. Trying to scare Montag back onto the hot and crisp, Beatty tells him how they got into such a mess: “our civilisation is so vast that we can’t have our minorities upset and stirred”. (Reading passages like that, one can understand why Mel Gibson took an interest in filming it.) That led to the books becoming so bland that everyone stopped caring about them. Guy’s friend Faber confirms this: “The public itself stopped reading of its own accord.”

The people of this America bury their unhappiness beneath piles of worthless television, hate poetry because it reminds them to cry, know they’re about to go to war but rely on platitudes to carry them through. Although the destruction of the books is a tragedy, it’s a symptom of something worse, a desire for the illusory safety of comforting ignorance.

Some saw an irony in the recent release of Fahrenheit 451 as an ebook, but they are perhaps missing the point of the novel. It’s about content, not bibliophilia, as reflected by the fact that the ultimate heroes of the novel are book-burners themselves, though for different reasons: “even when we had the books on hand, a long time ago, we didn’t use what we got out of them”. Even more than the content, it’s about how we relate to each other as people, and how books help us do that, despite all our differences.

But that’s not to say Fahrenheit 451 does not regard the books themselves as treasures too. And if ever there was an edition of this novel that had the quality, the texture, the pores that Faber talks of, it’s this one, with its fine printing and colour plates, its brilliant, chilling artwork by Sam Weber. I don’t read or buy myself print books very much these days, but when I do I want them to look like this (or if not, to be small enough to fit in my pocket like Penguin Mini Moderns).

It’s worth mentioning, because it’s easily overlooked, that as well as being full of ideas, this is a very exciting book—Montag’s night flight through the city, pursued by a robot sniffer dog and watched on every television, in particular—and it’s written in a punchy, hard style that surprised me. Given an extract that didn’t refer to firemen or books, I’d have gone for Frederik Pohl or Philip K. Dick; Bradbury wouldn’t have crossed my mind, based on what else I’ve read by him. Another reason we (I) should read these famous books, however well we think we know them.

Giving my opinion on such a fêted book seems a little redundant, but for what it’s worth it was brilliant and as relevant as ever, and this was a very attractive edition, with an excellent and informative introduction by Michael Moorcock. The paperback edition I never got around to reading will eventually find its way to a secondhand bookshop, but this one will stay on my bookshelves as long as I have them.
Posted by Stephen Theaker