The Bippolo Seed and Other Lost Stories, by Dr Seuss – reviewed by Jacob Edwards 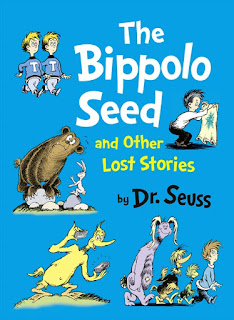 The Bippolo Seed and Other Lost Stories, by Dr Seuss (HarperCollins, hb, 72pp). Left foot, left foot, left foot, right, feet in mourning, feat in spite. Few people who have grown up to read (or write) speculative fiction will have done so without a childhood encounter or two with author/illustrator Theodor Geisel—alias Theo LeSieg or, more famously, Dr Seuss. In fact, so iconic are Geisel’s surrealist drawings and rhyming verse that ever since his death in 1991 the children’s book industry seems to have placed an indefinite moratorium on any work even remotely imitative. It’s as if some publishing god (or perhaps just the Geisel Estate lawyers, who reputedly are as hard-lined as the Yooks and the Zooks of Seuss’s Butter Battle Book) sent out a rhyming memo—something to the effect of:

Enough fuzzy lines and ’apestic tetrameter.
Say, “Tough!” and raise signs against ham-fisted amateurs.
See, there’s but one Seuss—godlike more than a Titan.
Beware, don’t let loose plods who bore with their writin’.
So publish? Be dammed! See that watered-down would-bes
are rubbished and canned where they oughta and should be.
The cat has his hat and no other may try it.
(But bring back the Doc. and, oh brother, they’ll buy it!)

Well, now Dr Seuss is back, with the posthumous publication of “The Bippolo Seed” and six other “lost” stories—lost in this case meaning published in Redbook Magazine from 1950–1951 and not (until now) collected in book form. “Forgotten about” would perhaps be more accurate; or possibly “swept under the rug”—for, although such a tag may not tick the right marketing boxes, there is much about “The Bippolo Seed” et al that hints at a very deliberate policy (at least to this point in time) of shielding these particular tales from re-printing.

“The Bippolo Seed” and its six fellows clearly belong to the text-focussed body of Geisel’s work—McElligot’s Pool (1947); even Green Eggs and Ham (1960)—rather than more visually based books like Oh, the Thinks You Can Think (1975), or such evenly balanced classics as Dr Seuss’s Sleep Book (1962) and The Lorax (1971). Furthermore, parts of the trademark Seuss verse seem cumbersome in Bippolo, particularly in comparison to those later rhymes that were targeted specifically at young readers. These Bippolo Seeds, conversely, are some of Geisel’s earlier works—they are sixty years old!—and however striking and original they must have seemed to Redbook subscribers back in the day, there is a rawness, an unrefinedness to them that cannot help but slightly disappoint those people who grew up spoilt on the subsequent, more polished output of Dr Seuss’s ever-developing pitter-patter.

Which is not to say that this “new” Seuss book is unfinished in any way. The Bippolo Seed is not like Hergé’s Tintin and Alph-Art—a skeletal work in progress; a mere storyboard for an unfinished story. It is, however, a creation that seems to trudge slightly, presenting almost with the forlorn and resigned stoop of one that has come to light only after those that already have superseded it. The titular story, for instance, features a prototype Cat (minus hat) inciting a Sneetch-like duck into making exuberant and escalatingly greedy plans for his Bippolo Seed. It is a cautionary tale, thoroughly Seuss-esque, yet rather old hat, as it were, in light of The Cat in the Hat (1957), The Sneetches (1961), or even “Gertrude McFuzz”—an outing markedly similar to “The Bippolo Seed”, first published in 1951 but already deemed worthy of collation in Yertle the Turtle and Other Stories (1958). Moving further into the Bippolo collection, “The Strange Shirt Spot” is almost shameless in its prefiguring of The Cat in the Hat Comes Back (1958), while the longest of the lost stories, “Gustav the Goldfish”, is the acknowledged precursor to A Fish Out of Water (1961)—a more compelling, book-length treatment written by Geisel’s first wife, Helen Palmer, and illustrated by Geisel’s protégé, P.D. Eastman.

Of the other stories collected in The Bippolo Seed, “The Rabbit, the Bear and the Zinniga-Zanniga” is a playful (though sparsely illustrated) lesson in how to fight brawn with brains—predating, obviously, but now reminiscent of Julia Donaldson’s and Axel Scheffler’s The Gruffalo (1999). “Tadd and Todd” is a brief, almost truncated paean to self-expression—yet slightly belaboured in its wordiness, and lacking the vitality of the equally outlandish Ten Apples Up on Top! (1961). “Steak For Supper” is something of a crossover piece, harking back to Geisel’s first book, And to Think That I Saw It on Mulberry Street (1937) but at the same time showcasing an early Seuss menagerie of weirdly named and exquisitely rendered creatures—the sort that would feature in On Beyond Zebra (1955) and increasingly as Geisel’s nib tended more towards surrealism. And finally, concluding the sunken treasure-trove of lost tales, “The Great Henry McBride” is a short and simple story of big dreams—a topic that Seuss revisited with considerably more fanfare in 1974 with the Quentin Blake illustrated Great Day for Up!

The writing, the conception of the Bippolo stories, then, is not Dr Seuss at his absolute best, and even the pictures in two of the lost tales—“Gustav the Goldfish” and “The Strange Shirt Spot”—show a distinct blurriness, as if they’ve been taken not from Geisel’s original drawings (lost, then found) but merely reproduced (and apparently over-magnified) direct from the pages of Redbook. This is a shame, for elsewhere there are glimpses of what was to come booming from the illustrative cannon of Dr Seuss: expressively anthropomorphic animal parodies; droopy, fuzzy, feathery creatures; oversized clothes; trippy trees; a remarkable talent for rendering dark night- and water-scapes. Such imagery—the imaginative backdrop against which the real world and unbridled zaniness versed—such was always the triumph of Dr Seuss; and the tragedy, of course, is not that the seven Bippolo stories were lost, or found, but that twenty years have passed since the living hand of Theodor Geisel could have played any part in their restoration.

On the whole, The Bippolo Seed and Other Lost Stories leaves the reader with something of a nostalgic yearning—feeling overjoyed, no doubt, to be in possession of seven Dr Seuss hors d’oeuvres not previously available, yet at the same time feeling strangely over that joy—unsatisfied by these “new” tales and so inspired, as like as not, to shelve them with appropriate reverence, and while doing so to pick out and revisit instead one or two of the more familiar old favourites.
Posted by Stephen Theaker