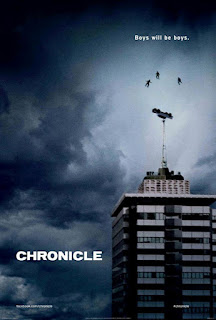 The found footage technique has emerged as a highly effective strategy for genre films. The Blair Witch Project (1999) and Paranormal Activity (2007) were masterpieces of minimalism that broke new ground in horror. Cloverfield (2008) brought the technique to science fiction by creating a disturbingly realistic alien invasion. Chronicle continues the found footage winning streak as a psychologically rich and culturally relevant urban fantasy.

Protagonist Andrew Detmer (Dane DeHaan) wants to get “all of it” (i.e. his troubled life) on film. Burdened by an alcoholic father and a dying mother, Andrew submits to the verbal and physical abuse that streams from his father, his classmates, and seemingly anyone who crosses his path.

Then Andrew, his philosopher-quoting cousin Matt, and his charismatic classmate Steve happen upon telekinetic powers. Whereas Matt and Steve are content with using the power for pranks and harmless fun, Andrew, whose calm exterior belies his suppressed rage, feels the need to transcend the games. Conflict broils between the three friends. Andrew, unable to balance his newly acquired powers with the dysfunction of his home life, develops a fixation on the “apex predator”. “You do not feel guilty when you squash a fly,” he tells the camera. “And I think that means something.” What starts as levitating Lego pieces escalates until it culminates in full-scale destruction on the streets of Seattle.

Unlike the standard shallow superhero film, Chronicle dares to explore the impact of a troubled childhood on one’s development. It is also a commentary on the potentially catastrophic effects of contemporary technology and its tendency to impede social development. One might even argue that the mysterious source of the kids’ power symbolizes technology. The film shows the spectrum of technological possibilities, ranging from humour (e.g., making a teddy bear float down from a store shelf to frighten a girl) to violence (e.g., forcing a vehicle off the road). Note that when Andrew does this latter example, he maintains a calm demeanour, and simply swipes his hand, as if exploring an iPad.

The film offers much more than special effects. In one goofy, yet charming scene, Matt (Alex Russell) captures the aloofness toward which today’s teen strives. Avoiding eye contact with the girl he likes, Matt repeatedly checks his phone, and pretends to be interested in something across the street, all while attempting to tell her his feelings.

The found footage strategy always begs a question: is it realistic that the character(s) would film all of this? In the case of Andrew, the answer is “yes”. At one point, Matt questions Andrew’s use of the camera, calling it a “barrier”. Andrew responds, “Maybe I want a barrier.” Moreover, Andrew uses his power to break free of found footage restrictions by levitating the camera and filming himself. The fluctuating camera angle reflects Andrew’s sometimes elevated, sometimes denigrating self-perception.

Although a couple of its scenes could be cut, Chronicle offers something for those who like “talk movies” and for those who prefer mayhem and destruction. There is no ticking time bomb (unless you count Andrew) or treasure hunt, but the characters are developed enough to keep the viewer engaged. Toward the film’s end, there is an image of Andrew that rivals in timelessness the iconic image of a blood-covered Carrie White shrouded in flames.
Posted by Stephen Theaker