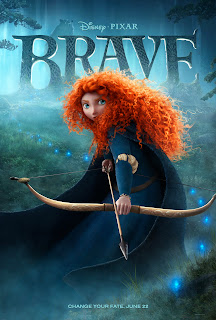 And so the spoils…Brave, directed by Brenda Chapman, then Mark Andrews.

Tenth century Scotland is ruled by King Fergus of the Clan DunBroch, but remains united largely through the diplomatic nous of his wife, Queen Elinor, who keeps the high-spirited squabbling of Fergus and his three most powerful allies (Lords MacGuffin, Macintosh and Dingwall) from escalating into pride-fuelled clan warfare. Elinor is schooling her teenage daughter, the Princess Merida, in the ways of queenliness, but Merida is as independent as her hair is red, and when she baulks at the prospect of being married off to whichever of the three clans’ firstborn sons should compete for her least ineptly in a betrothal contest, there develops between she and Elinor a mother/daughter rift that threatens not only the happiness of the Clan DunBroch but also the sanctity of Scottish traditions, upon which balance (somewhat precariously) the brotherly affections and rivalry that define Fergus and his fellow clan leaders. Merida hot-headedly bargains with a witch to “change” her mother, but must then deal with the consequences of that (over-literal) change and put things right before the scrambled yolk of second dawn breaks its permanency upon her wish.

For those who may happen upon Brave without the benefit of a trailer, the film’s first pleasant surprise will doubtlessly be its Scottishness, which comes as a revelation not so much in its existence (there being a real world, not a fantasy setting) but rather in the authenticity of its manifestation. This is not clichéd Scotland with outrageously fake accents, nor is it some grittily realistic historical re-creation so true-to-life that it becomes utterly bewildering to anyone who’s never played the bagpipes. Avoiding these extremes, Brave presents instead as a modernised but faithful depiction brought out through its genuine connections to the Scottish Isles. The score, for instance—which is comfortably saddled to the moods of the story and carries it along with a laudable measure of originality, bolstering rather than distracting—is by Scottish composer Patrick Doyle, and is distinctive in featuring (albeit sometimes in revamped, electronic form) a plethora of traditional Scottish instruments and cadences.[1] The voice cast, too, consists primarily of Scots or actors of Scottish descent, from Fergus and Elinor (Billy Connolly and Emma Thompson), through the Lords Dingwall, Macintosh and MacGuffin (Robbie Coltrane, Craig Ferguson and Kevin McKidd), to Merida herself (Kelly Macdonald of Trainspotting fame), whose part was to have gone to Reese Witherspoon until “scheduling issues” (read “the odds against successful dialogue coaching within the lifetime of the film”, or perhaps just “sanity”) prevailed.[2] The only notable outsider is the woodcarver/witch (Julie Walters), whose bear-plagued magic in any case lies very much on the peripheries of the Scottish world.

Second on the list of pleasant surprises will be the quality of Brave’s animation. The vast majority of Pixar feature films (of which there have been twelve, prior to Brave) have starred non-human characters—a practical decision, apparently, based on the limitations of what the studio’s animation system could realise—but with Brave that technology has been broken down and rebuilt to allow for the tremendous nuance that the Scottish folk show in both movement and expression.[3] This isn’t to say that the animals are lacking in any way—on the contrary, Merida’s horse Angus is supremely lovable, and Elinor is nothing short of award-winning when first transformed into a bear—but the depiction of people offers vast new scope and thus constitutes a tremendous leap forward for Pixar. (Perchance, therein lies the real significance of Enrico Casarosa’s short animation La Luna, which in theatrical release has been screened as Brave’s curtain-raiser?) To those of the “now” generation, Brave’s Scotsmen (in particular, no disrespect to the women) may call to mind the Vikings of How to Train Your Dragon (DreamWorks, 2010), but for those of us who grew up on static images, there is something in the poses and physiques of the Scottish protagonists—in their baffled expressiveness, their sudden interjection into proceedings, even the timing of their dialogue—that is ever so wonderfully reminiscent of Albert Uderzo’s Asterix comics, only brimming with all the vigour and vim so lacking throughout countless, soulless attempts elsewhere to animate our Gallic heroes and bring their comic poise to life. French visual effects company Mac Guff (Despicable Me, The Lorax) is planning a new Asterix animation for release in 2014,[4] but even at this early stage, judging by what is evidenced in Brave, it seems likely that fans will be more inclined to lament Pixar’s non-involvement than celebrate Mac Guff’s efforts to brew the magic potion.

Brave is structured around a female lead—this much is obvious from the theatrical poster—and has attracted further attention (and then renown) in the pervadingly male world of feature length animations for having a female director (the story’s originator, Brenda Chapman) who then was replaced mid-production.[5] For many of us, however, (adults and children alike), these gender issues are very much by-the-by. The beauty of Brave—and the third item on any speculative cinemagoer’s list of pleasant surprises—is not that it offers a challenge to the traditional male dominance over scripting and production elements, but rather that it tells a good story, and in doing so constructs a parent/child dynamic (which is easy to understand, whether one relates to it directly or not), and then pursues this storyline and relationship dynamic with clarity and purpose sans the hodgepodge elements that so many animated films seem to litter about the place in trying to pitch their product at four or five different age groups they clearly have judged to share nothing in common. Brave is a comedy, but its humour is such that everyone laughs at once rather than taking it in turns to be tickled (younger viewers boggling with incomprehension while teens snicker or oldsters wince their abhorrence of cutesy singing lemurs or such inanity). Brave is consistently funny, but achieves this through dint of astute peppering rather than saturation bombing. It also presents as both serious and emotional, and—whether due to its distribution by Disney, its much-vaunted feminine touch, or just the unabashed Scottish attitude that no man is too manly to wear a kilt or cry when he’s sad—tells its tale openly and without hiding its message behind an embarrassment of walk-on characters or paper-thin layers of substandard subplot. Behind the comedy, Brave is a film about responsibility, and just as Merida grows from impetuous beginnings to express herself within more measured constraints, so too does Brave learn from the capricious mistakes of some of its predecessors in the genre; by taking seriously its responsibility both to the subject matter and to the audience, Brave hurls the haggis far and blossoms as an animated comedy of considerable substance.