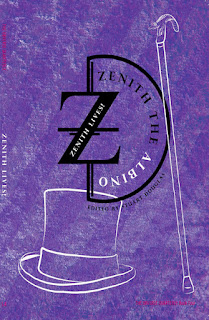 M. Zenith the Albino is from the rogues’ gallery of Sexton Blake, although a book with the variety and quality of Zenith Lives! (Obverse Books, pb, 2425ll, edited by Stuart Douglas, fourth entry in the Obverse Quarterly series), attracting such high quality contributors as Michael Moorcock and Paul Magrs, makes one wonder whether he might outlive his opponent. I won’t pretend to be an expert on Zenith: all I knew till reading this book was that he had inspired the appearance of Elric of Melniboné; I didn’t even know of his connection to Sexton Blake. Luckily, a couple of stories in, my interest piqued, I was able to refer to Blakiana, a superb website maintained by Mark Hodder, another of the contributors to this book. From there I learnt that the original conception was one that we might now think rather old-fashioned, in that Zenith turned to evil out of bitterness over his albinism, but that aspect isn’t one on which these stories particularly dwell. Unlike Elric, he’s not a weakling; in these stories we read of “his powerful muscles and extraordinary sense of balance”.

Michael Moorcock’s “Curaré” is the book’s main feature, a lengthy novella which begins with a zombie attack in a nightclub, French Tony’s, attended by M. Zenith, his long-term adversary Seaton Begg (standing in for Sexton Blake), and Dr Hoxton Ryman, a mad scientist who claims to have mended his ways, each of them with a smart, dangerous woman on his arm. Long, long ago Moorcock wrote a short Sexton Blake novel, The Caribbean Crisis, and he edited the Sexton Blake Library, and this feels like him having fun with a straightforward pulp action-adventure, the kind of thing he might have written for Sexton in the fifties, without the extraordinary science-fantastical elements that tend to characterise his recent writing; in fact I had a google at one point to see if it was a reprint.

In this story we learn of Zenith’s personal code: “Whoever had kidnapped Vespa had made an inexcusable mistake. / Up to now Zenith had joined in this adventure more for amusement than for profit. But no one attacked a man, woman or child, whom the Prince of Crime had chosen to protect. The game had become serious.” Zenith is a criminal with a raised eyebrow, but he becomes utterly serious when crossed; and is deadly whatever his mood. The story suffers from more typos than the rest of the book, but they are fairly insignificant and it was almost a privilege to see the kind of mistakes Moorcock makes.

What makes the anthology such a treat is that, hand on my heart, Moorcock fan that I am, I couldn’t say for sure that his is the best story in the collection. Another strong contender is “All the Many Rooms” by Paul Magrs, a more experimental, oblique and elegant story—albeit with a few sentences I didn’t understand at all (“We all knew it was going corridors, polishing everything in sight to a gleaming shine”)—in which Zenith makes a late, Christ-like appearance at a party at Ms Mapp’s house, with attendees such as “Ziggy and Alvin Stardust, Dick Turpin, Mrs Slocombe, Sheila Manchu, Eric Morcambe [sic], Eeyore, Mrs Wibbsey and Captain Marvel”. Later mentions of portals (opened by pinking shears) suggest it isn’t a fancy dress party. After having enjoyed Paul Magrs’ audio stories for the fourth Doctor, I couldn’t help reading this one in the voice of Tom Baker (imagine him reading the words, “Quickly, I brought myself off rather grimly, without much fuss, and headed out of there” and I’m sure you’ll be keen to read more), which perhaps gave it an unfair advantage over other stories in the collection.

Zenith’s ennui is a key part of his character, as is his opium use: sometimes shown as a response to boredom, and in others as a way of encouraging lateral thinking. “The Albino’s Shadow” by George Mann and “Zenith’s End” by Stuart Douglas both explore the effect of ennui upon his actions.

In “The Albino’s Shadow” a detective (presumably Sexton Blake, who I’d guess is unnamed in the collection for copyright or trademark reasons) explains to Rutherford, the story’s protagonist, how he has survived his encounters with Zenith:

“He might have killed me more than once, save for his unusual moral code and his desire not to forgo a worthy opponent. Zenith obeys only his own rules, and they are close to unfathomable.”


In this story Zenith has threatened the life of the prime minister, and Rutherford is the man set on his trail (Sexton Blake being otherwise engaged).

“Zenith’s End” sees him in the nineteen-seventies, a youthful ninety-year-old preparing to end his life, a trace of vanity leading him to the Black Museum to recover his accoutrements, that his corpse might be recognisable. They have been sold at auction. The only story told by Zenith in the first person, it begins with his declaration that “my most immediate problem has always been boredom, which deplorable yet apparently inexorable condition has plagued me more and more with each passing year”.

Though these two stories cover similar territory, both entertain and provide useful insight into Zenith’s character.

Overall, a very good collection of stories, and so one hardly envies Mark Hodder, whose “The Blood of Our Land” has the responsibility of going first. But it bears up to the challenge well. It’s perhaps the most conventional of the tales, a story of Zenith in his criminal prime, at the head of the League of the Cobblers’ Last. Not having read other Sexton Blake books, but knowing Mark Hodder to be a fan, I couldn’t help taking this to be the default type of Zenith story, the median from which the others diverge (or not). That aside, it was an exciting story, with lots of intrigue and gunplay, all smartly handled. Like the other stories in the book, it left me wanting to read more, both by this author, and—fortunately, given its position in this collection—featuring Zenith.

If anything, the biggest obstacle to reading this book was the way it sent me off, excitedly, again and again, to read more, learn more about the character, not to mention his enemy Sexton Blake, and then Blake’s other enemies. In that regard the book has to be considered a great success. It presents (or re-presents) us with a fascinating character, demonstrates the wide range of stories in which he can be employed, excites an interest in the novels of the past in which he appears, and works as a very fine collection in itself. My favourite Obverse book so far.
Posted by Stephen Theaker