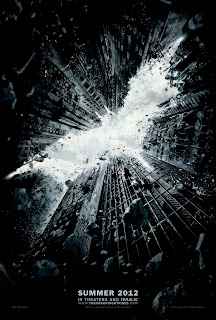 Gotham City is at peace and Batman hasn’t been seen in the eight years following the tumultuous events of The Dark Knight. With the vilification of his alter-ego and the financial losses suffered by Wayne Enterprises in pursuing then abandoning a clean energy project with unforeseen destructive potential, Bruce Wayne has sunk into a reclusive abstinence from society, mourning the life he could have lived with Rachel Dawes had she not been killed by the Joker. When Commissioner Gordon and rookie police officer John Blake uncover a villainous new threat lurking in Gotham’s sewers, and cat burglar Selina Kyle then allows Wayne’s fingerprints to be used to disastrous ill-effect, Batman must emerge to save his city from the fanatical machinations of Bane—a cogent, Herculean villain who trained under Wayne’s former mentor, Ra’s al Ghul. The menace is palpable but the Batman has aged and Wayne Enterprises is vulnerable. As Bane’s ruthlessly conceived schemes play out, both Gotham and her maligned protector will fall to new depths of despair and helplessness.

Many of Generation Z’s cinemagoers—indeed, quite a few of Generation Y’s—will have received their first live action Batman experience from Batman Begins (2005), rather than Tim Burton’s Batman (1989) or, going back to the 1960s, anything starring Adam West and Burt Ward. In this they have been fortunate. Sixties Batman was very much of its time and may have charmed the Baby Boomers with its colourful, slightly camp style, yet in many respects it formed the light-hearted nadir for a superhero who was born in 1939 under the hardboiled pulp star and then moulded by DC Comics with all the grit and dark overtones that characterised the early 1940s. Tim Burton rendered the Caped Crusader in his own, inimitably kooky style with Batman and then Batman Returns (1992), but then came non-Burton offerings Batman Forever (1995) and Batman & Robin (1997)—not to mention Catwoman (2004)—and with these pastiches all the quirkiness and menace suddenly gave way to parody and badly drawn melodrama. Generation X was horribly scarred; and yet, from their disillusioned and downtrodden ranks was born Gotham’s greatest hope: director Christopher Nolan.

Those who disavow the prevalent waft of overblown cinematic fluff—and there are some in every generation, surely?—will have tattooed Nolan’s name on their back-of-the-hand “remember to watch” notes after viewing his thriller/noir classic Memento (2000). The Prestige followed in 2006—and yes, Inception (2010), for all that it was hyped beyond the realms of its audacious designs—but before that there was Batman Begins, the “prequel” whose two sequels now show it to have been not a prequel at all, but rather a pulp-inked rewriting that blots out entirely those Kilmered and Jonesed, Clooneyed and Schwarzeneggered turkeys, and any other best-left-Berryed mistakes of the past. (And, collaterally, Tim Burton’s Batman; Vale, Vicki Vale.) Aged just 42, Christopher Nolan nevertheless constitutes an “old school” director in every sense that counts—shooting on film rather than video and taking an admirable stance with regard both to 3D movies (“It’s well suited to video games and other immersive technologies, but if you’re looking for an audience experience, stereoscopic is hard to embrace.”) and to CGI (“There are usually two different goals in a visual effects movie. One is to fool the audience into seeing something seamless, and that’s how I try to use it. The other is to impress the audience with the amount of money spent on the spectacle of the visual effect, and that I have no interest in.”)[1] Nolan crafted Batman Begins as an exploration of character, and although The Dark Knight (2008)—despite Heath Ledger’s much acclaimed portrayal of the Joker—may then have strayed too far into stony faced machismo and action sequences, The Dark Knight Rises concludes the eventual trilogy (Nolan didn’t set out with the intention of making one)[2] in a bleak yet uplifting, gripping yet down-to-earth manner—one that will be respected, hopefully, by any future purveyors of Batman on the big screen.

Batman Begins (140 mins) and The Dark Knight (152 mins) scored 8.3 and 8.9 respectively on IMDB. To some extent it is on the back of this previous success that The Dark Knight Rises (164 mins) has, at time of writing, been able to scale the heights of 9.1—in running for 2¾ hours (a considerable investment of screen-time for cinemas that could just as easily be selling tickets at the standard 90 min fare) the film takes the opportunity to develop characters and to play out a story that in more rushed circumstances could have presented as garbled and (an obvious risk) comic-book clichéd. There is a certain amount of comic-strip logic running through The Dark Knight Rises, but Nolan (who also co-wrote the screenplay) keeps it in check and ensures that the drama and spectacle remain, in large and at heart, both human and grounded. The musical score helps in this respect—courtesy of Hans Zimmer, a Prince in his own right—and of course the acting: Christian Bale spends less time as Batman this time around, and more as the physically frail and mentally anguished Bruce Wayne; Anne Hathaway looks for and finds her inner Hedy Lamarr in pussyfooting around as nascent Catwoman Selina Kyle; Joseph Gordon-Levitt (Inception) is believably earnest as officer John Blake (whose stature, looks and—spoiler—little-used birth name, hint cleverly—then a little too blatantly—at his involvement being, in fact, a backstory); old hands Gary Oldman, Morgan Freeman and (in particular) Michael Caine provide excellent support; and Tom Hardy (Tinker Tailor Soldier Spy; Inception) deserves special mention for being able to bring presence and nuance of delivery to a lead villain who not only has his face mostly obscured but also his voice filtered. Bane, like Batman, has derived from his childhood suffering a single-minded strength both physically and of purpose; Hardy pitches his performances perfectly on the common ground between the two characters, and in doing so crafts an adversary as chilling in his self-control as either Jack Nicholson or Heath Ledger were in embracing their demented extravagances. Bane’s effectiveness is testament both to Hardy’s finesse as an actor and to Nolan’s determination to pursue new ideas rather than upsizing and rehashing with each instalment of the franchise.

The Dark Knight Rises is a grim film—even its occasional snatches of humour are more laconic than lightly buttered—yet this bleakness is what lies (or at least should lie) at the armoured heart of the superhero ethos. After all, Batman and his ilk are spawned ultimately of despair and need, not choc tops and frivolity. (Even the overtly comedic Mystery Men (1999) recognised this and so gave gruesome shading to its heroes’ hapless masquerading.) And if The Dark Knight Rises is, at times, a little heavy on its symbolism, well, then so be it; it’s no more than the consequence of Christopher Nolan’s shining the spotlight so brightly. So long as the Bat-Signal continues thus to cut its silhouette faithfully through the fog, citizens X, Y and Z of Gotham will have much cause to seek out and embrace the pervading, cinematic darkness.