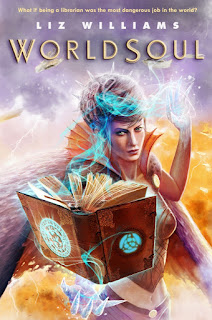 Worldsoul is a city somewhat adjacent to our world, and the subject of a fine novel by Liz Williams (Prime, tpb, 312pp). A year ago the Skein left Worldsoul, leaving its inhabitants to fend for themselves, but so far, despite the burning flower attacks from unknown enemies, they haven’t found a way to work together. The factions are too busy battling each other to deal with the problems the city faces. Mercy works in the Great Library of Worldsoul, strapping on weapons before going into the stacks to fight anything that escapes the books. She’s worried about one of her mothers, who sails the Liminality in hopes of finding the Skein, but won’t let it interfere with her work. Jonathan Deed is the Abbot General of the court, performing magic with the aid of grimoires, demons and gods, who wants control of the city. Shadow is an alchemist, more involved than she would like with Suleiman the Shah, and then even more involved with an ifrit. Mareritt is an ice queen, perhaps the original ice queen, who rides through legends in a sleigh that carries the severed heads of kings. Ancient myths, the nightmares of our oldest ancestors, are escaping from the stories that held them, and though “the mind is the best weapon of all”, ancient celtic swords, powerful magic and ninja skills will come in handy too.

There are many things I liked about this book; one is that it didn’t dive straight into a pigeonhole. There are other books that share its themes—there’s a nod to Mythago Wood in the mention of the “Holdstockian layer”, and there are echoes of Thursday Next and Michael Moorcock—but I never had that sense of seeing a few key signifiers and thinking, right, that’s what we’ve got here, that’s what’s going to happen. The only way to get a hold of this world was to pay attention to the book (and I suspect I still don’t quite have it all figured out, not that I’ve let that stop me writing a review!).

It’s the first thing I’ve read by Liz Williams, so I can’t say how it bears up to her other work or fits within her oeuvre; that is a weakness of the review, but gives me lots to look forward to reading. This one had nearly everything I look for in a book; exciting action, interesting mysteries, striking characters, good writing and fighting librarians. As far as one can tell from a review pdf the book is nicely designed and typeset, and the cover art is excellent. Don’t be put off by the new-agey title; it seems less blowsy after reading the book and makes sense; fairy tales are “the engine that runs this city”—the Liminality is (I think) the physical manifestation of our myths and legends, what could be called the soul of our world.

Unlike a fairy tale, Worldsoul doesn’t end with a happily ever after. There’s a battle, and a heroic sacrifice, a surprising revelation, and then, just as it looks like there might be an ending, a major event, Paul W.S. Anderson-style, that promises a sequel and does much to make the reader want one.
Posted by Stephen Theaker