Doctor Who: The Essential Companion – reviewed by Stephen Theaker 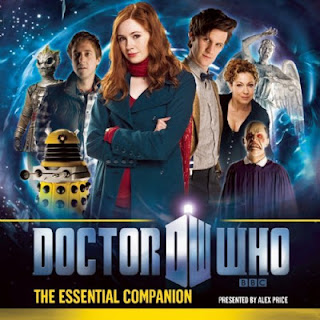 Doctor Who: The Essential Companion (BBC/AudioGo, 2×CD, 160 mins), written by Steve Tribe and narrated by Alex Price, stitches together snatches of dialogue from the fifth full season of new Who, from The Eleventh Hour through to The Big Bang. It introduces us to the eleventh Doctor and his companions, Amelia (later Amy) Pond and Rory Williams, and then introduces them (or the Doctor and Amy at least, Rory often being dead, left at home, or erased from the space/time continuum) to countries built on space whales, daleks serving cups of tea, crashed spaceships full of weeping angels, alien vampires in Venice, the dream lord, silurians, Vincent Van Gogh, football and the Pandorica: all the things that made season five so wonderful.

The two CDs do an excellent job of summarising the storylines and celebrating the best lines, and every now and again the narration has a nice take on what’s going on. Those who have seen these episodes, surely its target audience, will find it serves as a pleasant reminder of the fun we’ve had, although my children have never got very far into it before asking to watch the actual episodes instead. For those who haven’t seen the programme, it might intrigue them to give it a try, but would spoil all the surprises. It’s all a bit pointless in an era when you can just load videos of the episodes onto an iPod and listen to them, but I can’t bring myself to dislike anything so full of wonderful dialogue, not least the “Hello Stonehenge!” speech, included here in full.
Posted by Stephen Theaker