The Lorax – reviewed by Jacob Edwards 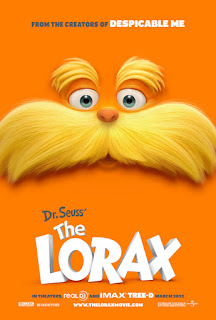 “I am the Lorax, I speak for the trees, but cutesy sells tickets, so do what you please.” The Lorax. Directed by Chris Renaud (with Kyle Balda).

Twelve year old Ted Wiggins (Zac Efron) lives in Thneed-Ville, an artificially happy and colourful bubble city with inflatable trees and commercialised fresh air. To win the affections of girl-next-door Audrey (Taylor Swift), he must first brave the wasteland outside of Thneed-Ville and speak to the crotchety, reclusive old Once-ler (Ed Helms), then plant a Truffula Tree in defiance of the nefarious and unscrupulous Mayor O’Hare (Rob Riggle). As the Once-ler confesses the details of his greedy, younger day Thneed-mongering and ecology-cruelling defiance of the Lorax (Danny DeVito), Ted’s determination to bring back a Truffula Tree comes to be shaped as much by environmental concern as by his romantic interest.

Of all Dr Seuss’s books, The Lorax (1971) is perhaps the most memorable—visually, linguistically, moralistically—and should therefore have been, if any, the most likely candidate for successful adaptation into a feature length animated film, as was achieved with Horton Hears a Who! (1954/2008). However, whereas Danny DeVito is undoubtedly an inspired piece of casting as the titular character—encapsulating not merely through association but also via artfully nuanced voice acting the impotently powerful, comically short, ineffectually good-hearted and sincere walrus-moustached guardian of the trees—other aspects of The Lorax’s production fall well short of Seuss’s original work.

The movie’s most obvious failing lies in its repeated inclusion of big piece musical numbers, the lyrical thrust of which seems to suggest a wannabe Seuss-ishness by co-writer Cinco Paul, but one that holds no great regard for the original text, and in any case hides itself behind cluttered spectacle and bombastic instrumentation. (Ben Folds may have prostrated himself in Over the Hedge, but at least he had the guts to do it bold-faced and “out there”.) Notwithstanding that there is no legitimate place in animated cinematography, generally, for the great and somewhat inexplicable American fondness for musicals, in The Lorax, specifically, where at a pinch all the Mickey Mouse singing might have been excused as filler to help pad a 61–page picture book into 86 minutes of film, clearly it doesn’t even serve this purpose. Indeed, very few of Seuss’s own words feature in the movie, and the most hauntingly evocative section of his original narrative—20 pages of denigration in which the “smogulous smoke” and “gluppity-glupp” and “schloppity-schlopp” of the Once-ler’s factories turn the Truffula paradise into a grey and poisoned wasteland—is compressed into a verse or two of the song “How Bad Can I Be?” and otherwise ignored, as if those Hollywood spirits who now speak for Theodor Geisel were somehow embarrassed or afraid to linger (or, more accurately, do more than touch fleetingly) on the sickened spectacle that lay at the heart of his cautionary vision.

Much though readers of Dr Seuss might approach a cinematic viewing with trepidation, film treatments of Theodor Geisel’s books were always going to require the creation of new material. That such could be scripted while staying true to Geisel’s imaginative scope was shown by the 2008 rendition of Horton Hears a Who! and, with the exception of the aforementioned musical numbers, The Lorax again demonstrates the writers’ capacity to don the big, zany hat without becoming hopelessly lost in it. Ken Daurio and Cinco Paul comprised half the team responsible for the Horton screenplay, and the non-adaptive aspects of their Lorax script are similarly impressive in capturing the unexplored peripheries of Seuss’s book. Thneed-Ville, for example, is transformed from a dour, subsistence town backdrop into a colourful, walled-off settlement of false cheer and prosperity. The contrast between the two short-of-stature characters—the doddering, overwhelmed Lorax and the pernicious, over-compensating Mayor O’Hare—is played up in suitably Seuss-esque style, and the fleshing out of Ted Wiggins from nameless listener to spunky and modern-generation adolescent participant is achieved without going beyond the essential boundaries of the determined and inquisitively undaunted stock child character who appears regularly throughout Geisel’s works.

These new elements of The Lorax are handled with finesse, yet aspects of the original book are treated with less fidelity, and pointlessly so, perverting some of its charm and effect. Most seriously, the Once-ler and his fellow capitalists have ceased to be a family of mostly-hidden individuals with mysterious green arms emerging from off-page or behind bushes or inside buckets and wagons and buildings. Instead, they are presented as “ordinary” caricatured hillbillies—even the typically outlandish Once-ler Wagon is rendered mundane—and the Once-ler himself is made to physically resemble an older, less fortunately circumstanced version of Ted Wiggins. Through substitution of this seemingly obligatory (by American movie sensibilities) dysfunctional family background, the Once-ler is given an excuse for doing what he does, and although there may be some merit in moralising to children the importance of keeping to one’s promises and integrity, it nevertheless seems terribly unfaithful to take the formerly opportunistic and entrepreneurial Once-ler—in blatant allegory, the faceless arm of short-sighted industrial “biggering”—and to strip him of his corporate anonymity, thenceforth colourising his actions as merely the misguided selfishness of a good-at-heart kid whose failings can be blamed squarely on his parents. The concept of the Once-ler as “victim” is in no way part of Geisel’s story, and to see the carelessly destructive villain offered this level of pardon (he is even shown to have “redeemed” himself by growing a Lorax-like moustache) will be thoroughly galling to anyone evenly vaguely cognisant of the book’s original premise.

The shame of this conceptual faithlessness is that The Lorax, in terms of its technical aspects, captures quite beautifully both the verdant paradise and chilling devastation of Geisel’s illustrations, not to mention his mad flare for steampunk contraptions and wondrously warped architecture. The Truffula Trees are as divine as their felling by the Super-Axe-Hackers is hellish, and the chopping down of the last tree—presented as a wearied labour, almost; the inevitable conclusion of a sequence over which the initiator assumes neither control nor responsibility—is without doubt one of the most forlorn and poignant moments in modern cinematic history. This isn’t something that the film dwells upon, however, and the overwhelming impression one receives is that the box office “biggerers” were given too much say in keeping The Lorax as light and childishly palatable as other, well-known works in the Dr Seuss library.

The result, sadly, is that Geisel’s grim and masterful book has been done a disservice—likewise its adherents—and the film, though containing much that is funny and enjoyable, falls far short of being the ominous and overtly portentous classic it could so easily have been, had only the cinematic realisation been knitted together with a Once-ler’s great skilful skill, then brought to the big screen through judicious use of a Thneed.
Posted by Stephen Theaker