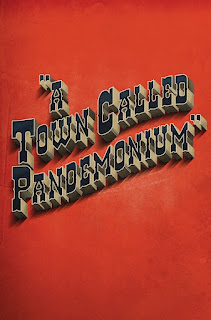 A Town Called Pandemonium (Jurassic London, ebook, 3576ll), edited by Anne C. Perry and Jared Shurin (of Pornokitsch fame) is a shared world anthology along the lines of Thieves’ World and Wild Cards. It’s odd now to think how exciting those books were when they first appeared, that excitement having been long-buried under inferior instalments and imitations. Thankfully, the stories in this book aren’t overburdened with continuity, and all would work perfectly well outside the context of the book; this is a collection of short stories rather than a mosaic novel. Set in and around the Wild West town of Pandemonium, they are roughly arranged in chronological order, and most feature an element of fantasy.

For example, in “The Sad Tale of the Deakins Boys”, Will Hill tells of a family of unpleasant prospectors who get caught in a flash flood in a mountain mine with a peculiar infestation, and what happens when a survivor takes his trouble into town. “Grit” by Scott K. Andrews, one of the less memorable stories here, is about a werewolf and a girl he infects, while “Belle Deeds” by Chrysanthy Balis is about a woman who gives up – maybe – her soul for the sake of getting the man she wants. “Raise the Beam High” by Jonathan Oliver concerns a fellow taking confession for a shadowy figure’s gratification.

Sam Sykes is an entertaining presence on Twitter, but “Wish for a Gun” is the first story of his I’ve read, and it’s one of the best in the collection. As an American contributor he can go all out on dialect without too much fear of looking silly, but his story of an old, bereaved man talking to a trickster from a well has many other good qualities. Joseph D’Lacey’s “The Gathering of Sheaves” is one of the few stories to show much interest in the survival, in this shared world, of the Anasazi, a long-lost Native American tribe. One gets the impression that for him (as for me) the word “Anasazi” triggered memories of the X-Files episode of the same name; the story features many elements reminiscent of that series.

Towards the end there are a few straight westerns, unless we take the high-pitched wailing of “Rhod the Killer” to suggest he is the son of a siren. He is the first taxman to visit Pandemonium in a while, and we see the knock-on effects of his encounters with the townsfolk. One of the more light-hearted contributions to the book, and one of the most memorable. Readers with an aversion to vernacular narration will find parts of “4.52 to Pandemonium” by Archie Black to be a chore, but the story survives those passages to reach an entertaining conclusion. It’s about the hold-up of a stagecoach, and plays the trick of letting us get to know Jake, a nice guy mixed up with the robbers, before switching to the point of view of those inside the coach.

“Red Hot Hate” by Den Patrick is about a young widow who takes in a hunky new lodger who doesn’t like to talk about his past. It has a nice reference back to the events of “Belle Deeds”, typical of the book’s pleasantly low-key approach to the shared-world concept. There is enough continuity for readers to admire the editors’ skill in making it work, but not so much that it detracts from individual stories. Similarly, in “Sleep in Fire” by Osgood Vance, Ben, a tough out of New York, came out west to work for a man who didn’t make it out of “Rhod the Killer” alive. The story is a spin on Beowulf: Ben and his gang stay at the house of a rich old man, and a deadly villain comes each night to kill and cut off arms.

The tone of the stories is fairly consistent: serious, violent, desperate. There is humour, but generally of the grimmest variety. This is the Wild West as a dangerous place to live, rather than a playground for big kids (although it will remind readers of Red Dead Redemption in places). The writing is often unexpectedly ambitious, with writers experimenting with point of view, tense and narrative style (“Sleep in Fire”, for example, switches between third person narrative and a first person monologue). That contributes to an overall feeling of confidence in the collection, and though it wasn’t a book I was ever desperate to return to reading, put that down to me not being a great fan of Westerns in any medium. There are no bad stories here, and the best are very good.
Posted by Stephen Theaker