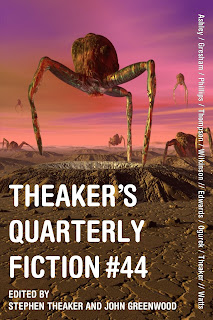 Theaker’s Quarterly Fiction #44 is now out! It features five stories, arranged roughly in the chronological order of their settings: “A Lesson from the Undergrowth” by Charles Wilkinson, “Snow Crime” by Allen Ashley, “The Return of the Terrible Darkness” by Howard Phillips, “Black Sun” by Douglas Thompson, and “Milo on Fire” by Ross Gresham.

You’re going to love them. (Except the Howard Phillips one.)

The review section isn’t quite as long as last issue’s, but it still features five books (Dodger, A Game of Groans, Martian Sands, Señor 105 and the Elements of Danger and Star Wars: Scoundrels), three films (The Host, Star Trek Into Darkness and World War Z), and two television programmes (Astronauts and Doctor Who: Shada).

The editorial explains why I’m not retiring the magazine just yet, and the cover is once again by Howard Watts.

Allen Ashley is currently editing Astrologica: Stories of the Zodiac for The Alchemy Press, and has stories due in the next BFS Journal and the Eibonvale Press anthology Rustblind and Silverbright. (Four contributors to this issue appear in that book: Allen Ashley, Charles Wilkinson, Douglas Thompson and John Greenwood.)

Douglas Thompson is a Theaker’s Quarterly veteran, several of his stories having appeared in these pages. He is the author of seven books: Ultrameta (Eibonvale, 2009), Sylvow (Eibonvale, 2010), Apoidea (The Exaggerated Press, 2011), Mechagnosis (Dog Horn, 2012), Entanglement (Elsewhen, 2012), with Freasdal and Volwys & Other Stories due in late 2013 from Acair and Dog Horn Publishing respectively. See: http://douglasthompson.wordpress.com for more information about his activities – plus poetry!

Howard Phillips is one of this magazine’s most prolific contributors, though he has been absent from its pages for far too long, or, those of you who have read his work might say, not long enough. Poet, musician, philosopher: he does it all, though none of it well. In this issue’s instalment of his memoirs he must face his own sexism.

Howard Watts is a writer, artist and composer living in Seaford who provides the cover to this issue. (I spent much of June and July reading his unpublished but fascinating novel, The Master of Clouds. I hope a publisher picks it up soon, because it irks me no end to have read a book that cannot be included on my Goodreads list.)

Jacob Edwards supplies us with several in-depth reviews this issue: Dodger, Star Wars: Scoundrels, Star Trek Into Darkness and Astronauts and Doctor Who: Shada. However, he remains indentured to Australia’s speculative fiction flagship Andromeda Spaceways, editing #45 and #55 of their Inflight Magazine. The website of this writer, poet and recovering lexiphanicist: www.jacobedwards.id.au.

John Greenwood performs his usual co-editorial duties on this issue, and his own fiction has appeared recently in Rustblind and Silverblight, Bourbon Penn and The Ironic Fantastic (forthcoming), receiving such good notices that Stephen now regrets disabusing people of the notion that John is merely a pseudonym adopted for his more scathing reviews.

Ross Gresham teaches at the Air Force Academy in Colorado Springs. Other instalments of the Milo/Marmite saga have appeared in TQF34 (“Name the Planet”), TQF41 (“Milo Don’t Count Coup”) and M-Brane SF (“Spending the Government’s 28”).

Stephen Theaker is the eponymous co-editor of Theaker’s Quarterly Fiction, and supplies fewer reviews than usual to this issue, unless he writes more in the gap between putting this section together and sending this issue to press. His reviews have also appeared in Interzone, Black Static, Prism and the BFS Journal. He has two lovely children and an indulgent, supportive wife.
Posted by Stephen Theaker