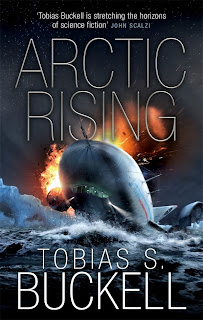 Arctic Rising by Tobias S. Buckell (Del Rey, pb, 340pp) is set the day after tomorrow, in a world much changed by the melting of the ice caps. Our protagonist is Anika Duncan, who enters the book with a season three feel; this might be her first book, but it isn’t her first adventure. She’s in the middle of an exciting life, and would have had plenty to tell us about even if the book’s main plot didn’t kick in, from a past as a mercenary to her budding relationship with an almost-legal drug dealer. But none of that is why she’s in trouble: it’s because of her conscientious approach to her work.

Floating in an airship over the Arctic for the United Nations Polar Guard, keeping an eye out for the illegal dumping of radioactive waste, she barely has time to back up the readings of her neutron scatter camera on a chip before the crew of a dodgy-looking vessel pull out their rocket launchers and blast her ship out of the sky – before turning their boat around to run her over for good measure! Her co-pilot doesn’t make it out of the hospital, and from that point Anika is on the run, pursued – as lovers of action thrillers would expect – by the bad guys and her own employers too.

Tobias Buckell is a writer I know from his (very sensible and well-reasoned) blog rather than his books, which often seems to be the case these days. The book’s cover quotes John Scalzi as saying that “Tobias Buckell is stretching the horizons of science fiction”. He’s probably talking about other work; here, if anything, he’s stretching the horizons of the action thriller. It’s exciting, fun and smooth, competent and confident, and a bit of a trojan horse, taking environmental issues to an audience who might not otherwise be receptive to them. The big speech on the environment is cleverly left to a villain, meaning those types who blow a gasket over “left-wing” politics (is the environment still considered a left-wing issue anywhere but the US?) in their action can take it or leave it.

What the book does extremely well is consider how rising sea levels could produce a very different world, geopolitically, with newly fertile Canada in the ascendant. Its most interesting point is that once a new status quo is in place, even one that seems disastrous from our present point of view, there will be people happy with it, making money from it, who will actively fight to prevent things being put right. And in the character of Roo we get a keen sense, without being clubbed over the head with it, of what it is to live in a world where the circumstances of your life are decided by more powerful countries: his island home drowned in the rising ocean levels, and now he is a freelance spy working for nations that can’t afford their own intelligence networks.

Del Rey books seem to give me that old-time library feel. Their books have illustrative artwork on their covers, have good hooks, and are not so voluminous that a three-week loan would not be long enough to read them. They might not always be the kind of books I’d buy myself, but they’re the kind that I’d pick up and read on holiday if I saw a copy unattended. In some ways this feels like a book ideal for reluctant readers. The type is nice and big, the chapters short and punchy, action following action with rest and recovery times kept to a minimum. Don’t read the back cover text past the first paragraph: it gives away all of the book’s major twists, even those that only come in its final chapters!—Reviewed by Stephen Theaker
Posted by Stephen Theaker