The Strange Talent of Luther Strode, reviewed by Stephen Theaker 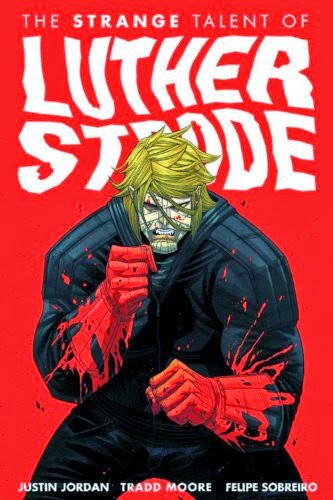 You would be forgiven for thinking that The Strange Talent of Luther Strode (Image, tpb, 162pp) must be related to getting himself published despite the poorness of his book. As well as his megamuscles and talent for ultraviolence, he must be extremely persuasive. Either that or writer Justin Jordan and artist Tradd Moore know where the Image Comics skeletons are kept.

As the book begins, Luther has just been shot seven times in the chest, but he’s caught the bullets in his muscles, and works out how to push them back out. He’s also just killed half a dozen guys by kicking and punching them so hard they exploded. And he’s got X-ray vision, which helps when he’s looking for weak spots.

Rewind to find out how he got those powers: he was a skinny guy getting bullied, who sent off for The Hercules Method – though it turns out there is a bit more to it than that. He gets into trouble as bad guys come after him, does some fights, gets cosy with a sassy girl, tries to keep his mum and best pal out of trouble.

This was one of the worst comic books I’ve read in recent years. There is some fighting, and anger, and violence – lots of blood and rage – and if that’s what you’re after, you might go for it. The story was poor, and the artwork isn’t that appealing, unless you really love seeing what people’s muscles look like under the skin.

It grabs bits from Spider-Man – Luther puts his Flash Thompson in a neck brace – and Flex Mentallo, mixes it with Garth Ennis levels of blood, but lacks any of that writer’s wit or imagination. Best avoided. The basic idea of a weed becoming a strongman was handled more imaginatively in Major Bummer (reviewed back in issue #38).

In one set of panels a gun is fired at the main villain and he dodges it, which is one thing, but he also, between the bullet being fired and it reaching him, manages to say, “Ah, well then…” – which makes no sense, unless he was talking so quickly the person he was talking to wouldn’t have been able to understand him. Like the book itself, it’s supposed to look cool but falls flat.
Posted by Stephen Theaker