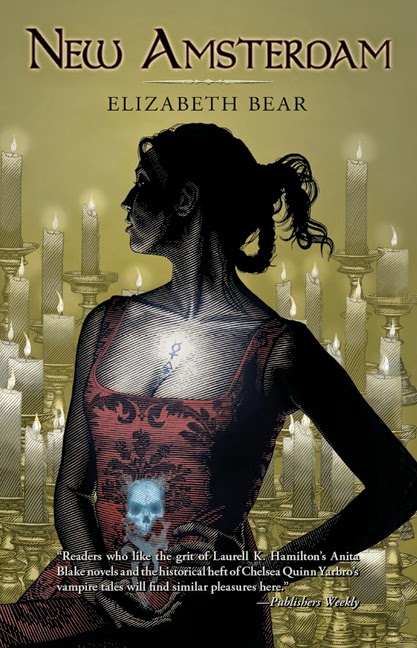 Technology has changed reading in many ways, and one of them is that it’s rarer now to read a book in ignorance; we frequently come to books having read, or at least glimpsed from the corner of our eyes, dozens of Amazon or Goodreads reviews, seen breathless recommendations from Twitter users, or even watched the trailer. And so New Amsterdam by Elizabeth Bear (Subterranean Press, ebook, 4797ll), which I bought in epub from the Weightless bookstore on the basis of its wonderful cover by Patrick Arrasmith, was able to give me a pleasure I had long-forgotten: beginning to read a book, and slowly realising it’s in the same series as another book I liked a lot! It took me back to reading The Last Battle as a child, and part-way in thinking, Hang on, wasn’t this Aslan guy in that cartoon I saw at Christmas?

It was in The White City (reviewed in #42) that I had first met the main characters in New Amsterdam: Sebastien de Ullua, a thousand-year-old (at least) vampire and his friend, lover and blood bank Jack; and Abigail Irene Garrett. This precedes The White City. It’s in these pages that Abigail meets Sebastien for the first time, once he and Jack reach the city of the title and get themselves into trouble. At this point she is still a Detective Crown Investigator, and by the end we have discovered the circumstances in which she left that position. The book can be read as a novel, and themes and storylines stretch across the length of it. It reads more naturally, though, as a series of novellas and long short stories – some saw separate publication in magazines.

The first is “Lucifugous”, in March 1899, a murder mystery upon a zeppelin – a tricky way for a vampire to travel. “Wax” sees Garrett investigate the death of a boy whose skull has been cracked and his brains scooped out. In “Wane”, set in 1902, they investigate the murder of the Lord Mayor’s wife, and meet Michel Nezahualcoyotl, an ambassador from the Aztec Emperor. In “Limerent”, set later that year, the victim dies in a locked room, an unfired gun in his lap. A very old acquaintance of Sebastien makes an unwelcome return in “Chatoyant”, and their subsequent flight from New Amsterdam takes them to Paris. In “Lumere” they meet the old ghosts of that city.

A thread running through the book is the slow build of tensions between the colonies and the King, and the part played in that by the French and the Irish, with whom Jack has some sympathy. The relationship between Jack and Sebastien, who doesn’t care much for the games of what are to him ephemeral nations, is sensitively depicted, a May to December romance to beat them all. We never doubt what each of them gains from the other, and can understand why they stick together despite the faultlines in their relationship.

The same goes for Abby Irene; Sebastien is gorgeous, of course, but he fascinates her, a bottomless well into which she can pour her boundless curiosity – when the cases allow. Supernatural mysteries seem to be very much in fashion at the moment, and here is an older book in which both elements are superbly handled, the solutions to the murder mysteries clever, the supernatural elements truly frightening. The romances are convincing, affecting even my cold rock of a heart, the politics and schemes and world situation an interesting variation on events in our history (it’s New Amsterdam, not New York). Books structured this way always appeal to me – the legacy of growing up on sf fix-ups. An excellent book, and I wish I’d read it sooner.
Posted by Stephen Theaker