The Goblin Emperor by Katherine Addison, reviewed by Stephen Theaker 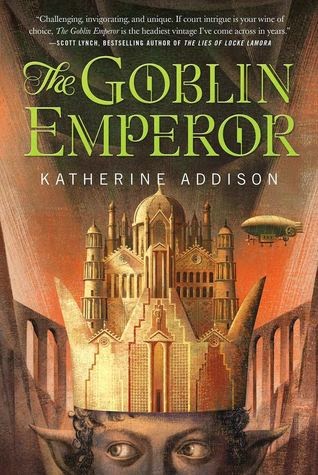 In The Goblin Emperor (Tor, ebook, 6853ll) Katherine Addison (a name which is, as the dedication hints, a pseudonym) introduces us to Maia, an angry young man exiled to the middle of nowhere with a violent, oppressive guardian: his cousin Setheris. He wakes to the news that his father and older brothers have perished in an airship disaster, the Wisdom of Choharo having crashed with no survivors on the way back from a wedding.

His deadbeat dad was Varenechibel the Fourth, 208th emperor of the Elflands. His mother, Chenelo Drazharan, was a goblin, married off to the emperor for political reasons. Maia was the accident of the marriage’s single act of consummation. In looks, he takes after his mother, which would draw the distrust of the elves even if they weren’t faced with him becoming their new emperor.

Anyone who has read Claudius the God will have an idea of what to expect next. A clever, despised protagonist, dropped into a nest of vipers, learning the ropes and coming good despite the obstacles in his way. However, this book is rather more optimistic (and isn’t bound by history), and Maia – or Edrehasivar VII, as he styles himself upon becoming the 209th emperor – is lucky: in his world paying it forward pays off.

The goodwill he earns through kind words and deeds saves his life more than once - in the very first chapter he earns an essential ally through kindness to the messenger bringing word of his father’s death. This is a book that moseys along in an amiable and pleasant way, with good rewarded and evil punished, and good people facing the challenge of how to stay good when dealing with bad people.

You have to root for Maia as he sorts out the mess left by his father’s death, tries to reckon with his feelings about his father, and investigates whether that death was an accident or not. On top of that he must deal with plots and attempted coups, win the grudging respect of gruff bodyguards and a snooty court, negotiate with foreign powers, select a wife (and learn how to speak to her), and decide whether to build a fancy clockwork bridge.

Though there is plenty going on, it’s quite a static book, Maia’s new position at the heart of empire not permitting much travel. The plot progresses, on the whole, through a series of meetings and conversations. An early look at the appendices is helpful here: extracts from a handbook for travellers in the Elflands, they explain a lot about the subtle use of names and forms of address in the book.

Readers shouldn’t be put off by the dialogue in the early pages - “Merciful goddesses, boy, canst do nothing for thyself?” cries Setheris - because it doesn’t set the tone for the rest of the book. This is a good, enjoyable book, cleanly written, and though it felt quite gentle in comparison to the likes of Game of Thrones and is probably aimed at younger readers than me, it’s nice for once to see a good person’s miserable life get better rather than worse.
Posted by Stephen Theaker