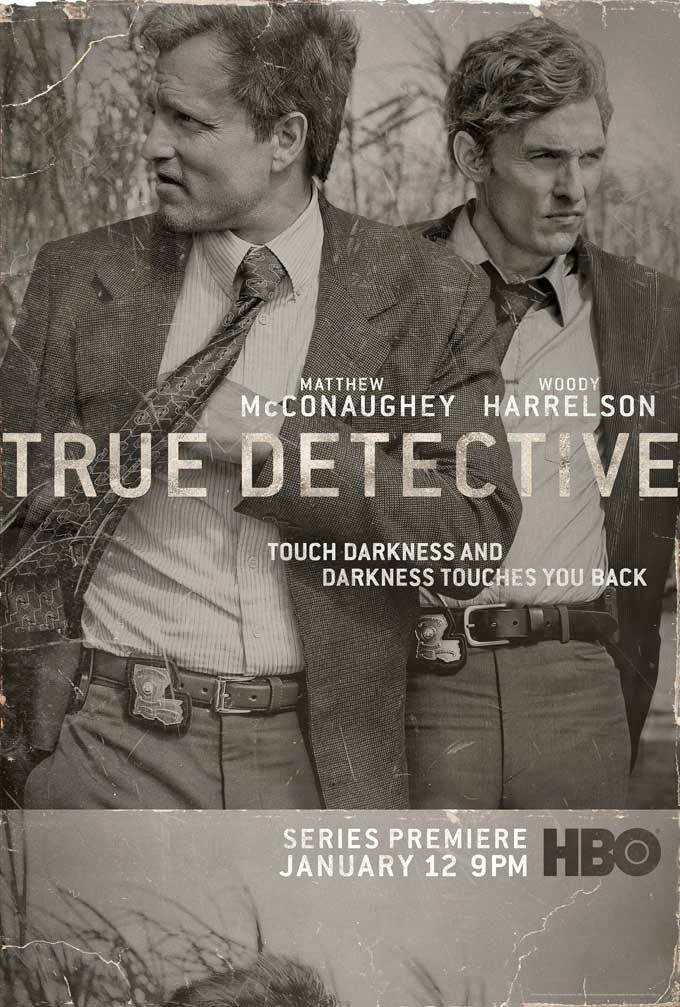 Is True Detective, Season 1 (Sky Atlantic, TV, 8 episodes) a crime programme or a supernatural programme? Even by the end I wasn’t entirely sure, though I suppose the title is a clue. I’ll hedge my bets and call it horror.

The series tells the story of two police officers in Louisiana working together for the first time. Marty Hart (Woody Harrelson) is a family man cheating on his wife (Michelle Monaghan). Rust Cohle, played by an incandescent Matthew McConaughey, is a loner with a bare apartment who cribs his bleak philosophy of life from the likes of Thomas Ligotti. They don’t get on – a shame given how much time they’ll spend stuck in a car together.

They catch a disturbing homicide, a young woman posed nude by a tree in the middle of a field with a crown of antlers. Investigations reveal she was a girl went missing a long time ago, and soon Marty and Rust are falling into a rabbit hole of abducted children, cover-ups, abandoned schools and churches, secret societies and conspiracies. That’s all happening in the mid-nineties, but their investigation is framed by interviews in 2012 with a portly Marty and an unhinged Rust.

Both lead actors give what I’d be tempted to call career best performances if I ignored how many of their performances I haven’t yet seen. Marty is funny when getting riled by Rust, but behaves like an utter jerk towards his wife, and worse towards his girlfriend. Woody Harrelson makes every cruel comment feel in character, never holding back to preserve a good-guy image. Marty’s ruining his own life, and he knows it.

McConaughey deserves all the awards that don’t go to Harrelson. He (with help from the costume, make-up and hair departments, of course) creates a stunning contrast between the handsome young Rust, looking like he stepped out of a Paul Grist comic, just about keeping it together despite a miserable spell undercover for the DEA, and the dishevelled, ruined guy he becomes – but you never doubt that it’s the same guy.

Though the programme comes close to perfection, it doesn’t quite get there. The exploitative female nudity in some episodes is crass and embarrassing, as sexy as the contractual obligation to HBO one suspects it to have been. The final episode doesn’t quite live up to the heights that precede it, and features a cringeworthy spiritual discussion that felt shoehorned in to satisfy the needs of the actor who delivers it.

But step over those things and you’ll find a stunning piece of work. Nic Pizzolatto writes all eight episodes, and Cary Joji Fukunaga directs them all, which gives it, whether in quiet reflection or thrilling action, an unusual degree of creative consistency – though of course that’s only a good thing because it’s consistently excellent. I’d call it an eight-hour film, but this is television so compelling it puts cinema to shame.

The assumption seems to be that season two will feature a new pair of detectives. If that’s been confirmed offscreen, it seems a shame. Rust and Marty worked together for several years, and for many of those they thought this case was over. What else did they investigate in that time? And what happens next? I would love to find out.
Posted by Stephen Theaker