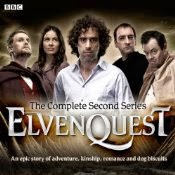 Elvenquest: The Complete Second Series (Audible edition, 2 hr 46) by Anil Gupta and Richard Pinto, sees the questers – Lord Vidar the elf, Dean the dwarf, Penthiselea the Amazon princess, Amis the chosen one (a former dog), and his owner Sam – unapologetically sent back to square one in their quest for the sword of Aznagar. It is once more abroad in the land! The subsequent adventures of this daft bunch are typically caused by their greed, lust, laziness and selfishness, and a general lack of appreciation for each other. Plots come second to jokes.

Meanwhile, villainous Lord Darkness, having made his way back to this world from another dimension, must recover his lost immortality, persuade bankers to lend him enough money to pay his mighty armies, and deal with personnel issues – the infernal horde find him a bit intimidating. His conversations with assistant Creech (similar to those of Blackadder and Baldrick) provide many of the programme’s funniest moments.

I really enjoyed series one, but my radio listening tends to be irregular and so I had missed series two till now. There is a cast change, Kevin Eldon taking over as Dean the dwarf, though in tribute to his mimicry I didn’t realise until seeing the cast list. It was as much fun as the first, and perhaps more, as the arbitrary nature of the quest becomes even more of a joke itself.

Like many of its fellow Radio 4 programmes (The News Quiz, Sorry I Haven’t a Clue, Just a Minute, The Now Show, etc), a strength of Elvenquest is the warm relationship between performers and audience. Pulled out and put on display some jokes would seem rather flaccid, but it’s hard not to laugh along when the audience is having such a good time.

It felt a bit daft buying the kind of programme that is so frequently repeated, but two or three listens later it’s clear my Audible token was well spent.
Posted by Stephen Theaker