Costume Not Included by Matthew Hughes, reviewed by Stephen Theaker 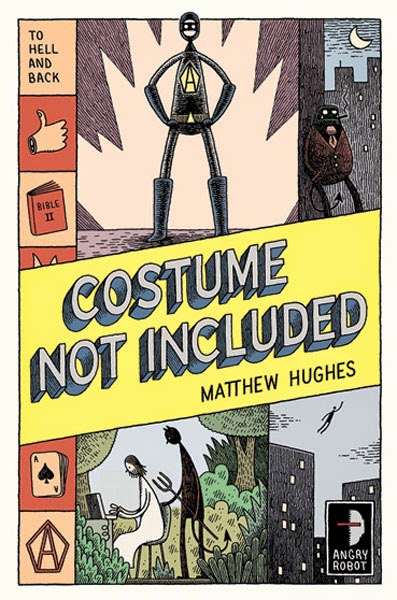 When last we left him, Chesney Arnstruther had set himself up as a superhero – The Actionary – found himself a nice girlfriend, Melda McCann, and caused significant problems for the bad guys, up to and including Lucifer himself. It was trouble twixt heaven and hell that got him his super-powers in the first place, a by-product of a negotiation between the two post-mortem destinations. That all happened in The Damned Busters, book one in the To Hell and Back series, reviewed in #37. Costume Not Included (Angry Robot, ebook, 4432ll) is book two, and it continues from the first book pretty much directly.

Chesney’s “weasel-headed, sabertooth-fanged” demon Xaphan is now much friendlier, having grown accustomed to the benefits that come with working for the Actuary. Chesney’s over-protective mother Letitia has taken up with the Reverend Billy Lee Hardacre, a top-rated television preacher who plans to announce The Actionary as the prophet of a new era. Crime rates are low, thanks to the city’s new superhero, and so Chesney ends up investigating a cold case, the disappearance of a journalism student nine years ago, which quickly blows hot.

As with the superheroics of the first book, the most entertaining element of Costume Not Included might be considered a spoiler, were it not shown in Tom Gauld’s excellent cover illustration. Yes, that’s Jesus typing on a laptop at the bottom (or at least one version of him), brought into the story by Chesney to write a new Bible. Hardacre thinks the universe is a book being written by God, and maybe he’s right – trouble is, this Jesus comes from an earlier draft. It’s amusing to see how the conversation between Jesus and a modern-day television evangelist might go.

If you’re a fan of the TV show Community, imagine how Abed might cope with almost infinite power in a world of angels and demons and you’ll have a good sense of this book. If the Actionary dangled me over the edge of a tall building, I’d say whatever he wanted me to say. If he created a safe environment for me to express my feelings honestly, I’d admit I prefer this writer’s far future science fantasy to these modern day superheroics, but I enjoyed this book more than the first, perhaps because all the pieces of the world were in place and the author could just start playing with them.
Posted by Stephen Theaker